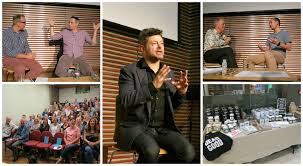 Plans are taking shape for our new-look ‘Wordstock Deconstructed’

We said in February that our traditional one-day Wordstock bash would be spread out over several months this year, so more members could get involved. Since then we’ve been putting together a lively mix of events, talks and workshops.

Here are a few of the things we’ve got planned. For more info, email: admin@26.org.uk

Many writers and creative people hate talking about money. What should we charge? How much can we earn? What other money taboos do we need to break?

Taking a lead from the successful Death Cafe movement, speechwriter Brian Jenner will host a coffee-shop chat about how we feel about money.

It will be honest, open, cathartic fun. We’ll be confirming the date and venue soon.

Look inside The Other Box – more creative diversity, please.

Writers and creative people prize the ability to think ‘outside the box’, if you’ll excuse the cliché for a second. Yet we work in an industry that’s often criticised for being ‘hideously white’.

26er Roshni Goyate has co-founded The Other Box to help more people of colour and other minorities to build a career in the creative industry. Here she’ll talk about what she’s doing and why – and how 26 members can support the cause.

Adventures in Wordography – or taking photos with words

In this experimental wander through the streets of London, 26er and Dark Angels partner Neil Baker invites you to play with the idea of making “photos” with words, rather than a camera.

We’ll explore how concepts from street photography – like depth of field and the decisive moment – can open the door to new ways of thinking about writing and creating. We’ll write as we walk, making and sharing a portfolio of Wordographs.

Fancy seeing your writing on screen? Keen to apply tips about dramatic storytelling to your own business or creative work? Then come along to our Q&A with screenwriter Rob Williams.

Rob learnt his craft at the BBC’s scriptwriting academy and worked on series such as EastEnders, Doctors and Casualty before getting his own original drama show, ‘Chasing Shadows’, on ITV. Recently, he was lead writer/consulting producer on the hit Amazon drama ‘The Man in the High Castle’.

Rob will let 26ers pick his brains at The October Gallery, London. 21st September. Early bird tickets will go on sale in May.

We’re keen to hear from you, too – especially if you’re outside London. What would you like to run yourself? And where? And when? The focus is on small and often, so anything you suggest shouldn’t be a huge undertaking.

We look forward to hearing from you. Please send your ideas to admin@26.org.uk