Forget about Guardian Soulmates and Match, meet your life partner at 26 – David Bodanis and Claire Falcon did. And, then reader, they got married. And 26’s Andy Hayes was the mystery guest.

Yes, become a 26-er and true love could be yours. Latest to tie the knot are writer David Bodanis of Wordstock fame, and Claire Falcon, Dark Angel and faithful devotee of our alphabetical institution. ‘I did say when I heard him speak at Wordstock in October that I could have listened to him all afternoon, but I didn’t realise I’d end up listening to him for the rest of my life!’ said the blushing (and slightly bemused) bride. The surprise ceremony at Islington Town Hall on Friday 5 July (sprung on the bride just a few days earlier – although she’d had her outfit, including sparkly gold shoes, ready for weeks, in anticipation of the moment), included mystery guest, 26-er and Marathon Man Andy Hayes – now to be known as ‘the Fixer’ – whose invitation to Throwaway Lines in November was the catalyst for this budding romance. ‘At Andy’s exhibition, I was standing by the door chatting to Ezri as Claire was leaving – so I should also thank him for not being prettier and longer-haired or I might have missed my moment!’ David commented.

Claire and David would like to thank Andy not only for inviting them both but also for being such a nice chap that they decided to go despite both having other things they had to go to as well that night; to thank Ezri – well, for not being a girl!; and to thank 26 for existing. Oh yes, and not forgetting Elise Valmorbida who invited David to speak at Wordstock in the first place… ah, and then John Simmons who invited Claire to be a 26-er and Dark Angel all those years ago… but I think that’s enough thanks now, thank you Claire and David. Oh yes, alright then, we can thank God too but really, that’s quite enough now.

Need an autumn writing tune-up? There are still a couple of places on the Advanced Course in glorious Andalucia, 19-24 September. 26 members are eligible for 10% off our quoted rates.

The Stories We Tell

The second of Jamie & Sarah Jauncey’s personal insight workshops – time out to look at the stories we tell about our lives, and the changes and challenges we face, in new and creative ways. Sep 7 & 8, Birnam, Perthshire.

I am organising The Word, a one-day festival on September 21 for writers in Lancashire that is based loosely on the Wordstock model. We have great guest speakers including short story writer Zoe Lambert and travel writer Peter Moore. Our writing project on the day, Writing Astley Hall, will get everybody writing about our Elizabethan venue, one of the most beautiful houses in Lancashire. Any writer in the North West is welcome to this great networking opportunity. All that for only £20!

Write2screen – take a look at the website here – have launched their first script development scheme Script Hot House, with a deadline of August 2nd 2013. While it is a regional initiative, eligible writers don’t have to actually live and work in the eastern region currently, but can qualify if they have strong, demonstrable, connections ie were born here, or spent a considerable amount of time here to work or study for example. This is also not just an opportunity for script specialists, instead we are actively encouraging writers who work in other mediums and formats to apply. 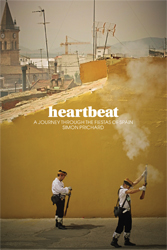 Book out by 26’s Simon Pritchard

Jobless, wifeless and at times homeless, I rediscover and write about my old flame, Spain.

After nearly 12 years researching, writing, leaving drafts in a drawer, starting again and the rest, today I published my book. Heartbeat: A journey through the fiestas of Spain tells of smoke processions, drunken tree-climbing contests, medieval scourges and fire battles. It’s the story of a 200-day party – and what happens when you stop.