From Roger Horberry’s words for RNLI to Elise Valmorbida’s Suitcase Stories and Carol McKay on BBC News, 26ers are busy as ever.

Writing from life with Suitcase Stories 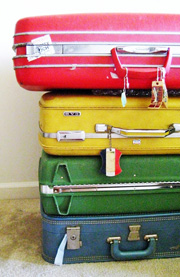 This November, 26ers Elise Valmorbida and Nick Barlay will be teaching at Arvon’s Ted Hughes Centre in Lumb Bank, West Yorkshire. Here’s a word about their brand new course, Suitcase Stories, which is all about journeying through life and writing about it.

Suitcase Stories is all about the journeys that make you who you are – perhaps the stories of migration that preceded you, perhaps the transformative journeys you’ve made from there to here. You’ll have days and evenings to explore memory, imagination, truth, character, language, plot and place. This immersive experience will help you develop a memoir, a family history, short stories or a novel.

The Suitcase Stories special guest is Haifa Zangana, an inspiring writer who spends more time than most in underground bunkers – and the UN – where she is called upon to advise on women’s rights and issues of war.

Nick is Jewish Hungarian. Haifa is Kurdish Iraqi. Elise is Italian Australian. All three live in Britain. All three have written published works inspired by migration.

Lumb Bank is an 18th-century mill-owner’s house which stands in 20 acres of steep woodland. The house once belonged to Ted Hughes and is set in a striking Pennine landscape of woods and rivers, fine stone houses and weavers’ cottages, packhorse trails and ruins of old mills.

Writing words for the lifeboat people 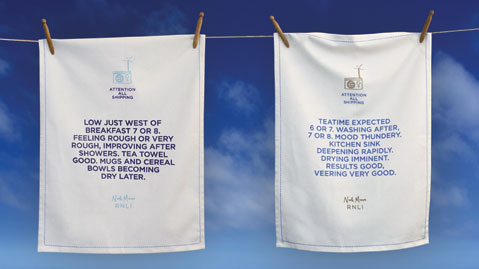 I’ve written the words for a range of homeward items for the RNLI (that’s the lifeboat people to you, squire) based on the venerable Shipping Forecast. I wouldn’t normally blow my own horn in this shameless fashion but the results have turned out rather well and are flying off the shelves at John Lewis. All of which is good news for the RNLI which, remarkably, receives almost no public money and instead relies on charitable donations and wheezes like this. Imagine if the fire brigade were a charity. Odd, isn’t it? Just go to www.johnlewis.com and search for “attention all shipping”. Roger Horberry

I’ve been doing some part-time work since January for the Music Publishers Association, writing copy and editing a newsletter and doing social media and so forth. It’s the first time in a while that I’ve worked in an office, and boy is it weird after having well and truly become a freelance work-from-home type. Even if I feel like a square peg in a round hole, I think it’s good to have had my work pattern shaken up a bit. And it means I’m out and about in London and keen to make exciting lunch plans (I refuse to eat in the office), so give me a bell. Maddie York

I’ve been smiling from the BBC website this month, after I appeared on the World Service programme ‘Health Check’ about my e-book Second Chances: true stories of living with Addison’s disease. It contains 16 stories from around the world, and there’s no other book like it on the market. Carol McKay

This is something I thought 26ers of all genders might be interested in. Sight & Sound is partnering with the UnderWire Festival to search for budding female film reporters. Send a piece of factual film reporting of up to 1,000 words, such as an interview with a film craftsperson, a report from a film shoot or a conversation with a distributor. Sight & Sound and UnderWire will publish the winning entry and, in collaboration, will provide the winner with further reporting assignments in 2013. The deadline for entries is 5 April. Find out more here. Elise Valmorbida

A special offer for POINT London – but be quick

Taking place on the 2nd and 3rd May in central London, the POINT London design conference will bring some 40 speakers to the capital to discuss design, communications, business, culture and society. Tim Rich has arranged a special offer for 26ers.

The theme of this year’s POINT is ‘authenticity’. Events will include presentations, debates, workshops and film screenings, and there will be plenty of opportunities to socialise too.

POINT is self-funded and is brought to you by a collective of designers who passionately believe that London needs a forum to discover, exemplify and discuss the issues that design forums create on a day-to-day basis.

The organisers of the conference are offering members of 26 a 25% discount on ticket prices. The 26 price is £225 excluding VAT, a saving of £75 on the price of an early bird ticket. To take up this limited offer you must purchase your ticket on or before 28th February 2013.

This is how to buy your discount ticket:

POINT London speakers will include:

Andy Altmann – Why Not Associates

“As you narrow the focus, in this case onto the story of the 13th Amendment, it allows you to see him in more of a profound way.”

This is Daniel Day-Lewis talking about his Oscar-nominated role of Abraham Lincoln in the Spielberg film Lincoln. The film focuses on one month in his life in January 1865. It covers the intense few weeks leading up to the historic decision to abolish slavery in the final months of the American Civil War.

I see the film after attending a University of East Anglia conference on biography. “Turning Points: the event, the collective and the return of the life-in-parts,” highlights how the genre is inexorably moving away from the traditional cradle-to-grave format to event-driven narratives of lives.

Richard Holmes gives a master class in the new form, immersing himself in pivotal moments of lives, embracing chronological dissonance and employing cinematic framing techniques. Holmes, however, is upstaged by Frances Wilson who tells of how she captured the life of J.Bruce Ismay, the owner of the Titanic, in her book “How to Survive the Titanic,” his life was both saved and ruined by a decision to jump into a lifeboat ahead of women and children as the ship went down. Frances’s starting point for “seeing the world through his consciousness,” is the “only interesting thing he ever did in his life, this movement of muscle.”

I am writing a biography of Laurie Lee, focusing on his formative Spanish Civil War years. I retrace a journey he made across Spain in 1935, the eve of the civil war.

I start the book in 2012. I am on a hilltop above the harbour in Vigo in NW Spain and I describe the moment in which I imagine Lee, below me, stepping off a boat onto Spanish soil for the first time in 1935. “He looks up at me, high above him on the hill, and for a moment, as our eyes engage, I see a hint of panic on his face.” Paul Murphy