The Enormous Crocodile, 26 five-year-olds and me 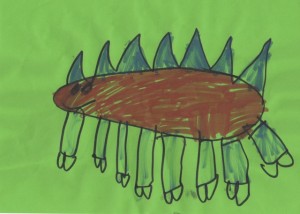 Olly Davy, one of the writers from our 26 Twits project reflects on sharing the delights of Roald Dahl at a school workshop dressed in a wolf onesie.

Make it kinaesthetic, my teacher pals advised. But advice based on a word you don’t understand is not the most helpful kind. Of course, I murmured, reaching for the dictionary. I’d already spent an hour with my very own Quentin Blake, my friend’s delightful daughter, Rosa, bouncing around mad theories about the Enormous Crocodile’s motivations for eating children and discussing the heroics of the jungle creatures who foiled his schemes. The session was guided by the focus of my response to Dahl’s book: the belligerent beast’s final, fatal, journey to the sun. Now it was time for the (self-inflicted) workshop at Rosa’s school – 26 (how apt) five-year-olds and me. Oh dear.

My nerves were calmed by the charming Miss Hutchinson at Halley House School in Hackney. She glided around the class arranging things for the afternoon while I gawped at the alien yet ever-so-familiar surroundings. I realised it had probably been a quarter of a century since I’d been in a room like it. Not that much has changed. The large interactive whiteboard dominating the front of the class is the most obvious addition.

“Thing is,” I explained to the unflappable Miss Hutchinson, “I’ve never done anything like this before and I’m worried they might, I don’t know, pick up on that…figure me out somehow.”

“They’re five,” she responded, somehow managing not to sound like she was talking to a simpleton. “Get their imaginations fired up and you won’t have any problems.”

The little people arrived, filing in wearing Roald Dahl-inspired fancy dress. There were several Charlie Buckets, a wicked witch, a Fantastic Mr Fox and some looser interpretations of characters that I couldn’t pin down. And there was Rosa, poorly that day but valiantly present and sporting a homemade Willy Wonka hat.

After a rousing welcome I flicked through some illustrations from the book, gauging their interest in the story, which had been read to them the previous day.

“Can anyone think of other words that mean ‘enormous’”? I asked, tentatively.

Hands shot up and the kids lobbed me an audio thesaurus.

As arranged, I then left the class, claiming I’d forgotten something, before creeping back in wearing a wolf onesie (the closest I could find to a crocodile). I paused at the door. Their backs were to me. I gave a fearsome roar. They turned as one.

“I’m going to find some delicious children to eat for my lunch!”

They screamed. I crept through the class, pretending not to have seen them. What next, I thought to myself, not knowing how this was going to develop or conclude. I suddenly ‘noticed’ the throng of children and let out a shriek of my own:

“So many! I can’t possibly eat them all”

I made for a giant cardboard Wonka bar, snatched it up and fled the room.

“Sorry about that,” I offered on my return. “I heard a strange noise. What was it?”

“IT WAS A WOLF AND IT WAS YOU!” Came the unanimous declaration.

“What? A wolf? Goodness. Let’s hope he doesn’t come back.”

The wicked witch was weeping, shocked by the dramatic episode. Miss Hutchinson offered consolation as tears rolled down the witch’s green-painted cheeks. Does making children cry count as engagement?

The next hour was a journey through illustration and ideas – encouraging, questioning, praising. I marvelled at the children’s boundless imaginations. I thought of Ken Robinson’s compelling argument that “schools kill creativity” and wondered how something so effervescent could be quashed, especially with talented enablers like Miss Hutchinson at the helm.

The children rotated between the desks, where they worked with me, and other creative activities. The building sets were a particular favourite with the boys who came to show me their efforts.

Boy Three (to me): “You should marry Optimus Prime”

Boy One (in revelatory tone): “You could marry a girl robot!”

I closed the workshop with a final frolic in the wolf outfit. No one cried this time but the class did reach manic levels of excitement as they turned on the child-eating transgressor. I was practically lynched and dashed away howling to avoid a forest of clawing hands.

The workshop was a rewarding and exhausting experience. I now have even greater respect for those who run classrooms day in, day out, not just for a couple of hours. It was thrilling to share the delights of Dahl with the next generation and my own imagination was nourished by the fearlessness of theirs.

Huge thanks to Halley House School, and Miss Hutchinson in particular, for making the workshop possible.

The 26 Twits website will launch on August 4th with a Dahlish story and artwork by a junior collaborator posted daily until we reach Roald Dahl’s.