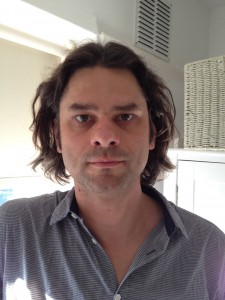 I first met Rob Williams nearly 20 years ago when he was a young man on the rise. He still is; it’s just that the rise now puts him at a very high level, especially since the recent success of the Amazon drama series The Man in the High Castle.

Rob was originally in publishing and he asked me to look at his work and advise him when he was at Hodder. He then moved on to Penguin where he became creative director and asked me to be his external mentor. I was happy to do that as I’d got to know and admire Rob through his involvement with 26 and Dark Angels.
Rob was part of 26’s first big project – 26 Letters with the British Library (Rob had the letter ‘P’ for Penguin). His next 26 project was the Circle line with London Underground (paired with Embankment). So you can tell Rob has been seeped in the ways of 26, exploring many different kinds of writing to help hone his craft.

But it was screenwriting that really excited him. He gained one of only eight places on the BBC Writers’ Academy, run by John Yorke, in 2008/9. His success there led to writing scripts for BBC dramas like Eastenders, Holby City, Casualty and Doctors, then DCI Banks on ITV before writing his own series for ITV – Chasing Shadows with Reece Shearsmith playing the central role.

All this brought him to international attention and he was recruited to the writing team for The Man in the High Castle, based on Philip K. Dick’s dystopian novel about what happened when the Japanese and Germans won the war and controlled America. You know you’ve arrived when you can turn jobs down – Rob shunned the third series so he could write more of his own stories. He’s just got back from LA where he was set to work on a new drama, and there are other UK ideas bubbling up.

That means there will be lots to talk about when I ask Rob the questions at a special event as part of Wordstock Deconstructed in September. Whether as readers, watchers or writers we all have a fascination with the dramatic storyteller’s craft. Come along and find out how it’s done.

I’m certain there will be ideas aplenty that you can take away and apply to your own writing efforts, whatever the field of writing you’re interested in.

Book your place now to see Rob Williams on 21 September. Tickets are £15 for members and guests. Non-members’ tickets are £26, which includes a six-month trial membership.