At Wordstock, we announced the winners of our first 26 Awards, which aim to celebrate and draw attention to new writers and to great writing.

We launched with two categories, both of which were free to enter and both of which relied on the generosity of people nominating others or our judges who gave up a lot of time to read and consider everything carefully. The judges were John Simmons, Elise Valmorbida, Neil Baker and Kirsten Irving.

And for the winner? A beautiful trophy designed by the eminent typographer Professor Phil Cleaver of the Type Archive.

Without further ado, here are our runners-up and our winners:

The Emerging Writer Award is for someone who has entered the commercial writing world in the last five years. There was no age limit and that person didn’t have to be a member of 26. The standard was very high. And as nomination is an accolade in itself, here are the nominees:

She started out as a graphic designer, and in just three years she has become an accomplished writer. Her wide-ranging work for the new-style NSPCC is emotive, subtle and original.

She wowed us all with her hilarious blog ‘diary’ about a withering romantic relationship with ebay. A brilliant show-not-tell lesson in how a brand can be exhausting, misleading and schizoid – just like a really bad lover.

This award is for a writer of courage, originality and spirit. And for his range of work. He has been a mentor at the Ministry of Stories. An editor and contributor to 26 writing projects. And a radical ‘Head of Words’ at Boots, spellbinding audiences of 70,000 people.

THE BEST WRITER ON A 26 PROJECT

For this category we chose from four 26 projects (26 children’s winters, 26 lies, 26 postcodes and 26 pairs of eyes) that were made public between 1 June 2015 and 31 May 2016. Any of the work on four projects was automatically entered – but work by members of the 26 Board was excluded.

We wanted to draw attention to the quality of the writing produced consistently on 26 projects by our members. 26 projects do really challenge our writers to give their best but also to enjoy themselves, perhaps in a different form of writing from their normal style. It has paid off over the years – and particularly this year with the writers on these projects. Congratulations to all the writers who volunteered to take part and who produced such wonderful words – funny, poignant, lyrical.

He wrote cleverly and with emotional intensity about the postcode PA60 7XW, where George Orwell wrote 1984. “Un-getable.”

She wrote with imagination and emotion – a beautiful poem titled Lost and Found – about an unassuming donation box at the Foundling Museum. 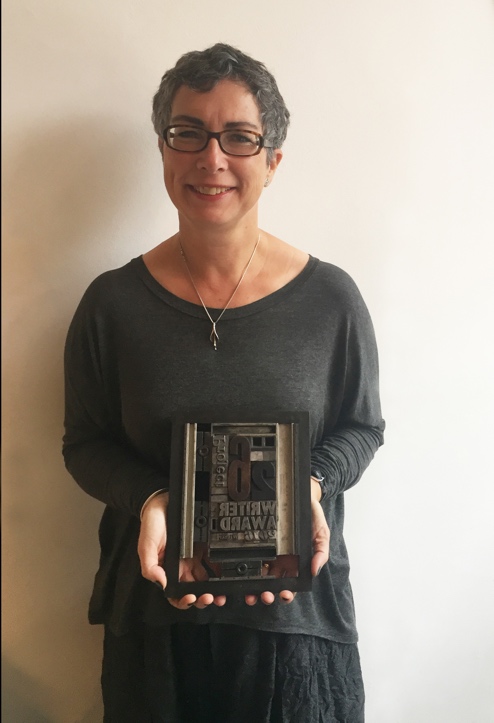 Sarah wrote an outstanding poem, Unknown Matron’s Mallet. It’s assured, understated, profound and poignant. It felt perfect at every reading of it.

Through glass
I run my finger along its grain,
picture the tree the mallet came from,
the fruit it bore.
I see a man cut one branch,
turn and balance it, carefully,
the better to be held in a warm hand,
the better to keep silence,
here among the hundreds of breaths
that cloud the glass
in this room of rootless children.

So congratulations to all of the nominees, runners-up and winners. And thank you to our judges for carefully considering all of the submissions and some 100 project pieces. We think our first ever awards were a great success. But we’d love to hear your thoughts on whether you’d like us to run them for a second year. Also, look out for interviews with our winners in upcoming newsletters.