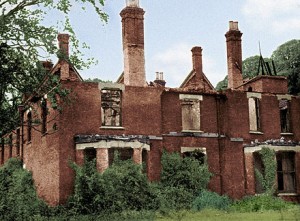 Fraser Southey visits CO10 7AE, the postcode for Borley Rectory, once known as Britain’s most haunted house. Stories of hauntings associated with the site may have inspired Rider Haggard’s Montezuma’s Daughter and Walter Scott’s epic poem Marmion. The rectory was seriously damaged by fire 76 years ago this week, on February 27 1939, and demolished five years later.

Borley Rectory. The most haunted house in England?

‘Ith there anybody there?’

the parlour adrip with ectoplasmic fluids,

the hem of my velveteen dress,

Spirits, psychics, Nazis and nuns – the dreaming of a sestude.

I’d shared a flat with a ghost cat, but never tried to contact ‘the other side’. Then 26 sent me to the Rectory.

It burnt down in unsuspicious circumstances in 1939 – so no actual visit. Instead, Street View clicks past a row of nondescript semis in semi-rural Essex. Nothing spooky, except a kid with a pixellated face, frozen forever on a blurry B-road.

Then Wikipedia. Where I encountered self-promoting psychic Harry Price, and Miss Helen Granville, a spinster of no fixed age who held ‘a planchette seance’ on Saturday 12th March 1938, during which Price contacted several of Borley’s spirit residents, including a headless nun. On the very same day, the Nazis invaded Austria.

The haunting was a hoax, of course, perpetrated by Price, perpetuated by his gullible followers. The evil forces converging on Austria were all too real.

Suddenly, my sestude flowed like ectoplasm. Summoning shades of Madame Arcaty, M R James and Sarah Walters, the phantasm of Helen Granville spirit-gifted me a persona poem, heavy with paranormal and parasexual possibilities. Her overblown verse provided a suitably melodramatic voiceover to my recurring dreams of Price’s interfering hands. Upon waking, I simply wrote it all down.