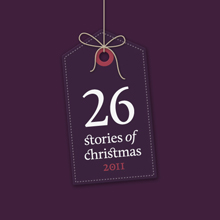 This time in 2011 we were deep in our Christmas storytelling project, 26 Stories of Christmas. We asked 26 writers to choose the object that means Christmas to them. Then we paired them randomly with another writer’s object, and asked each to write a 500-word story. From 1 – 26 December, we published a story a day, complete with beautiful illustrations. All 26 stories are collected here. Perfect reading for the Christmas break. We’ll start you off with the story published on 1st December. Nights at The Fir was written by John McGhee and illustrated by David Bate, and it was based on a wooden Advent tree… 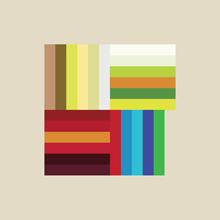 White Christmas, 1991. Sunday night, first week in December, David Mercer mesmerised The Greyhound’s drunken punters. With matchboxes and coins he prevailed in convoluted bar bets, dismissed salvoes of trivia questions. Each Christmas number one was named. When he sang, sonorous, they all saw the treetops glisten. He told the one about the Australian Santa Claus, to guffaws, applause. A regular, a tankard-above-the-bar-that’s-my-seat patron, issued a challenge. The landlord lined the bar with Irish creams, St-Germain and Sauvignon Blanc, Pernod, pastis and ouzos, overproofs, a terminal pint of vodka and milk. Mercer took each drink dauntlessly, claimed his fiver and bought the next round. At closing time, his black suit was freckled with artificial snow and tinsel. The landlord shook his hand as he left. I’m Cliff, get home safe, mate. I’m already home, Mercer said, a listing smile.

Green Christmas, 2009. Sunday night, second week in December. Mercer braced new faces at the bar. The Greyhound was now The Fir Tree. No-one engaged Mercer in his wagers. He fluffed the punchline of the Australian Santa. The thin pub herd peered at the widescreen. Cliff asked him to slow down as he poured Mercer’s self-dare, a replay of last season and seasons before. Mercer downed midori and lemonade, shots upon shots of triple sec and Cointreau, absinthe, appletinis, but the final chartreuse glass slipped from his hand, bounced on the floor. Mercer asked Cliff if his wife was back. Cliff asked Mercer why he’d never married. As Mercer scrambled for keys to his bicycle lock, Cliff said: for the road? Mercer poured crème de menthe into his silver hipflask and disappeared past the holly wreath on the door, into the snow.

Blue Christmas 2010. Sunday night, third week in December. In The Fir Tree, men in black suits reminisced. Christmas, it was Mercer’s best time. He’d lent them money. He’d known all the songs. Mercer had been a good sort, the best. He would have wanted you to have this back, said Mercer’s brother, a short man with Mercer’s voice. He passed Cliff the silver hipflask. One final time, Cliff lined the bar with potions of blue curacao, aftershocks and flaming sambuca. The crowd drank respectfully.

Red Christmas, 2001. Sunday night, fourth week in December, Mercer mesmerised The Fir Tree’s drunken punters. The best party ever. Mercer beckoned Cliff forward and they karaoked joyously. Cliff’s son, in flannel pyjamas, watched his father sing with the funny man as his mother tended bar. Mercer’s challenges were legendary and everyone watched as Cliff prepared the line-up. The photographer from the Advertiser snapped Camparis, bloody marys, red wine, crème de cassis, raspberry daiquiris. Mercer downed a final whisky and grenadine to the girls’ uproarious cheering. In the quiet of the lock-in that followed, Cliff passed a brown carrier bag to Mercer. In it was a silver hipflask. The engraving, Cliff said, the most important thing in this life. Mercer read: Goodwill to all men.

Two faded flat fir tree shapes that slotted together crossways with (after four Sundays in Advent) a white, green, blue and red candle at each corner.