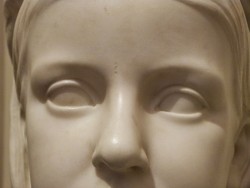 Be not ashamed that you were bred in this Hospital. Own it.’ Our new project with The Foundling Museum has begun. Following a visit that involved slips of paper drawn from a tricorn hat, cups of earl grey tea and a private tour of the collection, it’s now time to write the sestudes for a summer exhibition. Read Joan Lennon’s blog about her object – the foundling girl.

My Foundling Girl by Joan Lennon

I can’t remember when I first learned about Thomas Coram and the Foundling Hospital, about Handel’s charity performances of The Messiah, or about how artists would donate work to what was in effect the first public art gallery in the UK. But I do know that I was very drawn to the posts I read here by other History Girls* over the years which referred to that hugely evocative place. Heart-breaking. Inspiring. Up-lifting. Rending.

And now I have a link of my own. She has no name, and a few days ago I didn’t even know she existed. She’s called “The Foundling Girl” and now she’s my foundling girl. Because on Monday 2 February, slips of paper were drawn out of a tricorn hat and I was randomly paired with her.

This was the beginning of a collaboration between the writers’ collective 26 and the curators of the Foundling Museum, called “26 Pairs of Eyes: Looking at the Overlooked” which will be launched this summer. The object I’ve been asked to respond to was a marble bust made by David Watson Stevenson in 1871. I found her tucked behind a door in a corridor between two rooms.

She was cream marble against a cream wall.

I most likely would have overlooked her. But now, I was transfixed.

Projects like this are a challenge, of course they are, but also what a gift! Do you have a statue or a painting or an artefact in the Foundling Museum or any other museum/gallery that’s somehow yours? It’s great, isn’t it?

And if you get the chance, be sure to visit my girl.

or Eleanor Updale’s story of her father: Another Side of Christmas 1918