Here’s a feature that’s running in the January issue of Unfiltered, the magazine of the Scotch Malt Whisky Society. It’s about a project based around a special collection of whiskies – 26 Malts, which all started with a spirited conversation between writers Stuart Delves and Jamie Jauncey, and designer Damian Mullan. 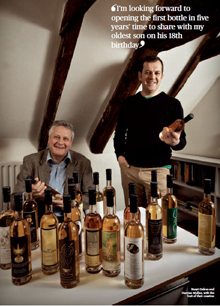 Over the past 30 years the Society bottle has become, we would argue, something of an understated icon. Yet, in 2005, a group of 52 top writers and designers were let loose on a special collection of 26 Society whiskies, charged with producing a unique set of bottle label designs and tasting notes for each.

The result of their creative outpourings was the legendary ‘26 Malts’ collection. Fifty sets were released at £850 and were quickly snapped up – with each owner enjoying a complimentary poster of the labels and a copy of the book chronicling the project: ‘26 Malts: Some Joy Ride’. After a complete set recently sold for a record price at auction, we resolved to track down some of the lucky owners, together with the designers and writers involved in the original project, to find out how the ‘26 Malts’ have fared over the past seven years.

On hearing the news about the auction, specialist insurance broker Martin Oliver from Glasgow admitted wishing he had bought two collections: a drinking set and a viewing set. He explains: “I bought the collection soon after the birth of my second son with the idea that I’d use the whisky as a special tipple for 26 occasions to celebrate over the coming years – between two boys with exams, 18th and 21st birthdays and even weddings!”

After languishing in the loft, the collection now has pride of place in a new sideboard, which shows the whisky to its best. Oliver says: “They look great and everyone comments on the collection but it also presents a conundrum for me, as I have to resist the temptation to open them. “I’m looking forward to opening the first bottle in five years’ time to share with my oldest son on his 18th birthday.”

Shirley Faichney from London clubbed together with a family friend to buy three collections, one of which is proudly displayed in a special cabinet in her kitchen. She says: “I bought a complete collection for my husband and a friend did likewise.

“Our collection is always a talking point as the labels each have a different story to tell – and this always leads you on to other things about whisky in a wider context. It is a nice surprise to know that they have a value – but it would be hard to part with them.”

The original idea for 26 Malts came from Edinburgh-based writer Stuart Delves, who quickly got fellow writer Jamie Jauncey and designer Damian Mullan on board. The three were part of a UK-wide collective of designers and writers called 26, whose mission is to champion the creative use of language in business. Stuart then approached Charlotte Halliday at the Society, who was an existing client, and together they got the ball rolling.

Halliday says: “The project was perfect for the Society as the whisky acted as the muse to writers, poets and designers who responded to the tastes and emotions that the malts provoked – it really helped release their creative juices.

“And they had as broad a brief as possible, which I think was an important factor in the wide and wonderful range of labels that were created.”

However, Mullen admits it was a logistical challenge, as well as a gamble for the Society. “We had to get 52 creative people paired up, given a whisky tasting induction course by the Society in Scotland and London, and then for them to work together to tell the story of the malt,” he says. Mullan was paired up with writer Matthew Fitt, who specialises in the Scots language. “After chatting about the whisky we decided to take people on the taste journey we were experiencing – from the nose, tongue and mouth,” recalls Mullen. “I designed the graphics and Matthew came up with the descriptions in Scots, to really try to embody the whisky in the bottle.”

Fitt says he enjoyed the collaboration with Damian, despite a shaky start after he drank (by mistake, he claims) the majority of the sample they were sent. He says: “Ours was a Speyside malt, from territory where both Gaelic and Doric are spoken, so describing the ‘cratur’ in Scots was quite natural. To this day, I believe it’s the only whisky in existence to announce itself in the Scots tongue.

“A cloud of mystery still surrounds the disappearance of my complimentary bottle at the launch but Scotland’s national whisky makar [poet or bard], Robin Laing, kindly brought me another. I opened it that moment and drank it. It was pure gallus aipple-gundy brawness.”*

Another designer involved in 26 Malts was Jeremy Scholfield, who remembers the project fondly, as it was one of his first commissions shortly after starting up his London-based design consultancy Skin in late 2004. “I teamed up with writer Martin Lee and we explored the idea of how our malt might inspire a conversation between two people,” he says. Martin came up with the idea of the ‘Chattering Glass’. “The design that was developed subsequently was about the words themselves taking the form of the whisky and the faces of the two people having the conversation. “It was a great experience and the exciting part was at the end when we got together with the other designers and writers to see how diverse the labels were and the different angles that people had taken.”

“The collection was wonderful and the response we got was fantastic,” adds Halliday. “Lots of members really understood where we were coming from.” For Damian and his merry band of whisky-enthused designers and writers the whole 26 Malts project was a great success: “It was a labour of love, but a great project to get to market, as the collection flew off the shelves.

“It’s a credit to the power of the words and imagery that gave a visual metaphor for this special range of malts – people just fell in love with the collection,” concludes Mullen.