We bring you recommendations from…

A Picture is Worth a Thousand Words 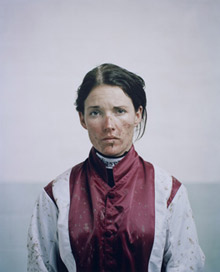 I went to the Taylor Wessing Photographic Portrait Prize award show at the National Portrait Gallery a couple of weeks ago. Spencer Murphy won for his portrait of jockey Katie Walsh. It’s an amazing shot, full of emotion, and the colours are beautiful. I also loved Linda Brownlee’s portrait of Zadie Smith. The exhibition of all 60 portraits is on until February. Definitely worth a visit.

My Broken Heart Only Wishes Her Well 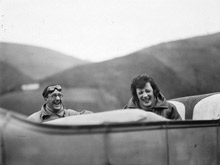 I greatly enjoyed the Jacques Henri Lartigue exhibition at The Photographers’ Gallery – a touching and captivating look at his life and especially his wife Bibi. Little gems from another world.

Also The Show is Over at the Gagosian Gallery in Kings Cross. What’s good about this is the pictures aren’t labelled so you’re obliged to interpret them for what they are, not in the light of what you might know about the artist.

Here’s a book which made me laugh so much I pressed it on another 26er during Saturday’s book swap. Sure you’ll get lots of submissions but it may be of interest. It’s What Just Happened? by Art Linson. We regularly hear what a den of vipers the real Hollywood is and these funny caustic tales from a battle-bowed (but far from beaten) producer/screenwriter pull no punches. I enjoyed his inventively rude turn of phrase and thought at times it must be fiction but nope, all true. Ouch.

1. The Rehearsal by Eleanor Catton. The Man Booker winner’s first novel is a fiendishly clever tale about a school sex scandal. (And it’s shorter than The Luminaries.)

2. The Mistletoe Bride. Kate Mosse was sparky and wise at Wordstock on Saturday. Buy her latest book.

3. Strawberry Hill House, Horace Walpole’s gothic castle is nearly at the bottom of my garden. It’s also halfway through a 20-year renovation process. Come and see it. (They sell Illy coffee.)

This is a superb book, by a writer very much in the tradition of Cormac McCarthy and Raymond Carver. It’s the story of two 20-year-old friends who get caught up in a terrible incident, and the impact this has on them and people close to them. A very simple concept, elegantly and sparely told, there isn’t a wasted scene or word throughout. Painful, humane and dignified in the telling, Meyer looks like being a major writer for a long time to come. His new novel, The Son, is also just out.

A Dense Novel About Love and Loss

1. I am loving The Goldfinch by Donna Tartt. She writes beautifully, with such imagination and confidence, a real page-turner. Only tip: at 700-plus pages, it’s worth reading on a Kindle.

2. I can’t wait to be spellbound – gripping my seat and forgetting about the popcorn – watching the 91-minute astronaut thriller Gravity with Sandra Bullock and George Clooney. James Cameron, director of Avatar, has reportedly described Gravity as “the best space film ever done.”

3. And if my children were closer to 8 than 18, I’d be taking them to the Royal Botanical Gardens at Kew Gardens. For the first time, gates open after dusk (Nov 28–Jan 4 www.keworg.com). Kids will love exploring the lit trail winding a mile-long path through the beautiful gardens.

A Norwegian Memoir Airs All

1. Karl Ove Knausgaard’s novel A Death in the Family – the first of his six-novel series ‘My Struggle’ (yes, the Hitler reference is intentional – you can read what he has to say about his writing in this Paris Review interview).

2. J. Robert Lennon’s Familiar – a novel about a woman who finds herself in a parallel version of her life. Gripping.

3. Seeing Steve Reich’s ‘Music for 18 Musicians’ performed live at the Festival Hall on Sunday, with the composer present. It got a standing ovation.

As for fiction, I’m reading Alex Ferguson’s new biography which certainly has a storyteller’s feel about it. My wife and daughter are obsessed with the Lorde song ‘Royals’ and I have to admit, the lyrics are pretty engaging, particularly as they’re a 16-year-old girl’s rejection of the ridiculous aspirational lifestyle espoused by mainstream pop singers. Here’s a sample.

But every song’s like gold teeth, grey goose, trippin’ in the bathroom.

We don’t care, we’re driving Cadillacs in our dreams.

But everybody’s like Cristal, Maybach, diamonds on your timepiece.

We don’t care, we aren’t caught up in your love affair.

Brand New Ancients by Kate Tempest is an hour-long spoken word performance told over live score. I saw it last year and was blown away. It’s an epic poem telling the story of two London families whose lives intertwine and then fall apart. It’s a rich story full of tragedy, comedy and everything in between. I wrote about it recently for the 26 and D&AD project, The Story Works. Tempest won the Ted Hughes award for innovation in poetry for Brand New Ancients and, luckily for those who missed it last year, Tempest has announced new tour dates.