Code of a Killer
Due to new puppy, I haven’t managed to get out to see things. However, saw Code of a Killer which was an excellent period drama piece. Script, acting, costumes and more importantly, the cars, were spot on. 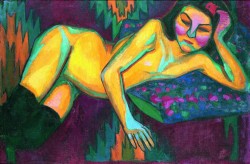 My three favourite things this month 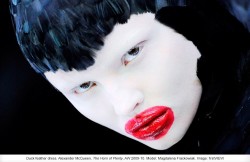 Alexander McQueen: Savage Beauty – at the V&A until 2 August

If you’re fascinated by McQueen’s tailoring genius and unique vision, go to this show. But go early. Book a 10am slot to avoid the crowds. Then you’ll get a clear view of the sculpted inky black feather dress from the Horn of Plenty collection, the beautifully carved wooden legs he made for amputee Aimee Mullins and the hologram of Kate Moss floating around in a billowing chiffon dress, until she disappears into sparks.

The best US TV/film series are wonderfully addictive – so damned well-written. West Wing, Sopranos, House of Cards etc etc. My current addiction is The Good Wife set in the world of Chicago lawyers and politicians. It was recommended by my son who gave me the box set of the first series for Christmas. Devoured it greedily. Unlike the turkey, I wanted more. Signed up for Netflix to watch Series 2. Now halfway through Series 3. Trying not to hear about Series 6 that is currently showing on Channel 4, don’t want my pleasure spoiled. And am even grateful that there’s nothing much on TV because that means I can carry on watching The Good Wife. Great characters, real and intriguing storylines, brilliant acting. 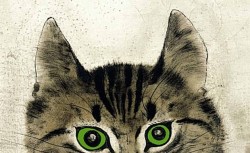 The Guest Cat by Takashi Hiraide

What a gem of a book this is. Currently flying high in the bestseller charts, The Guest Cat is a beguiling, deceptively slight story about a cat that invites itself into the lives of an ordinary Japanese couple in their 30s. Nothing is ever quite the same again. Poetic, charming and enigmatic as only a Japanese book can be. A three-hour read, and an elevating, soulful experience.

This story braids together retellings of the Rapunzel fairytale with the story of the 17th Century French woman, Charlotte Rose de la Force, who made it famous.

Full of strong characters, twists, turns and dramatic changes of fortune, this mix of historical biography and fantasy had me immersed in the court of The Sun King Louis XIV and its fantasy world.