I’m really enjoying the wonderful stories of Primo Levi’s The Periodic Table, adapted for Radio 4, translated by Raymond Rosenthal (never forget the translator!)
Levi, always one of my favourite European writers, takes the chemical elements – including of course Iron/Fe, atomic number 26 – as starting points for stories from his past. Compelling listening.

Highlight of the month was Into the Woods at the Menier Chocolate Factory. Great songs, ingenious staging, utterly joyful. This is a funny and deeply moving production of Stephen Sondheim’s fairytale-inspired musical. And if you hate musicals, just go for the wordplay – the rhymes and lyrical twists are astonishing.
Poet William Stafford

Surprise of the month, William Stafford. I’d never heard of this American poet until I stumbled across a Radio 4 programme about his work. Now I’m obsessed. A poet for whom writing was a life practice rather than a profession. He wrote early each day and published over 4,000 poems. The work is wonderful; the attitude to writing and its full value and purpose, inspirational. Listen here. 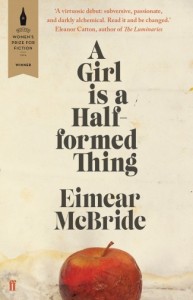 A Girl is a Half-formed Thing

By Eimear McBride, published by Faber. This won the Bailey’s Women’s Prize for Fiction in 2014 and deservedly so. It’s brilliant. A little like Riddley Walker in having the main character talk in a semi-private language, a little like any number of Irish writers with a grace and fluency with language, this is remarkable. And a massively poignant coming-of-age story at the heart of it. 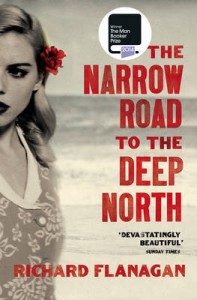 The Narrow Road to the Deep North

Finally got around to reading this, long after seeing a documentary about it. It’s a semi-fictionalised account of the author’s Tasmanian-born father’s experience as a Japanese POW, when the Australian troops were used as starved, tortured, slave-labour in pursuit of the Japanese Emperor’s impossible dream of building a Thai-Burma railway. It is stunning; unputdownable, not least because, apart from being so evocative of the sheer horror of his and his comrades’ experience, it also gives some idea of how the Japanese were themselves brutalised, and therefore capable of such insane brutality, by the insane demands of their emperor.

Still on war (what a cheerful soul I am), an exhibition of Scarlett Raven’s art exhibition commemorating the 100-year anniversary of the Somme, The Danger Tree, is extraordinary, like nothing I have seen before. It is an interactive exhibition, where you are given an iPad that, when focused on each painting, triggers films showing how each painting is in fact the end result of numerous stunning paintings that she kept painting over. Overlaid over her workings are actors reciting war poetry and war images and it’s amazing to watch each painting develop and see each short film end as the final product on the screen matches the canvas in front of you.

Both should be compulsory reading/viewing for war-mongering politicians.