From exhibitions in Scotland and tips for the Fringe, to festivals in Paris and cook books in London, 26 members bring you their recommendations to see out the end of the summer.

Blancanieves is a new Spanish film, shot like a 1920s black and white silent movie. It’s a retelling of the story of Snow White, set in Andalucia, incorporating Flamenco and bullfighting to give a completely different take on the traditional tale. Enchanting, and you take great pleasure in both the similarities and the differences from the original and the Disney version.

You Can’t Read This Book

There are limits to our freedoms of speech and expression that, as democratic citizens and writers, we recognise and respect. But other limits, to which we may never have consented, are growing more powerful. In You Can’t Read This Book, winner of the 2013 Political Book Awards for Polemic of the Year, Nick Cohen shows how god, money and the state are invoked to silence views that some find offensive, while others find it convenient to ‘manufacture offense’ for political ends. Often, it is writers who bear the brunt of the consequences. Sobering stuff.

I just finished reading The Zero, by Jess Walter. Intricate plot. Amazing writer. Can keep multiple story lines going at once. First rate author. Now onto Leaving the Atocha Station which is terrific and seems to have grabbed the imagination of many, many people who love fiction.

The Mary Queen of Scots Exhibition that is running at the National Museum of Scotland is amazing – it’ll last beyond the Edinburgh Festival too in case people are visiting another time. We are also getting excited about the Scottish Portrait Gallery showing Man Ray’s photographs which starts on 22nd (but I’ve had a press peek and it’s a great show).

A couple of years ago Patti Smith wrote Just Kids, a lyrical account of her love and friendship for Robert Mapplethorpe. But her collection of prose poems written in 1996 in The Coral Sea is an astonishingly beautiful catharsis for her grief for Mapplethorpe’s death. She writes, ‘All that I knew of him encrypted within a small suite of prose poems. They speak of his love for art, his patron Sam Wagstaff, and his caring for me. But most importantly his resolute will to live, that could not be contained, not even in death.’

There is an all-women’s commune in this six-part BBC drama series Top of the Lake, written and directed by Jane Campion, which is fascinating. The commune is called Paradise, made up of six shipping containers set amidst stunning mountains in the South Island of New Zealand. There is a healer/guru called GJ played by Holly Hunter, modelled after UG Krishnamurti, according to Campion. But it is the damaged women who you remember in the end. Watch it on the BBC iPlayer, read Campion’s TV blog, and tell me what you think. 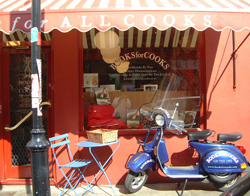 Where to find your cook book

Books for Cooks is an independent bookstore on Blenheim Crescent, just off the Portobello Road. It has an endearing, quirky tale to tell about how it came to be and is really the only bookshop on both sides of the pond completely dedicated to cook books. I used to work there, helping to organise the cooking workshops and ordering books for Pierre Koffman, Ainsley Harriott etc. The three-course lunches for under 15 quid and the freshly baked cakes in the test kitchen/cafe are worth the trip.

Leading authors from around the globe will be featured in next month’s inaugural World Writer’s Festival in Paris (September 20-22). Don’t miss the three day celebration of international literature starring such luminaries as Richard Ford, Kiran Desai, Walter Mosley, David Grossman and plenty more.

And pass the time on the Eurostar with Henning Mankell’s latest gripper, A Treacherous Paradise.

I can’t wait to watch Cate Blanchett, a modern day Blanche du Bois, and Alec Baldwin as her cheating spouse, in Woody Allen’s film Blue Jasmine. Critics say the tragic comedy which opens next month is his best.

This is a quite stunning documentary film by the young Canadian film-maker, Sarah Polley. It’s ostensibly the story of her investigation into the background of her own family. Her mother died when she was very young, and because of a certain air of mystery that hung over her family, she decided to use it as the basis for a family documentary. If the idea of an introspective family documentary sounds tedious, think again. It’s riveting. The narrative itself is fantastic, with unexpected twists that keep you hooked. But it’s also a brilliantly thought provoking exploration of notions of reality, editing, storytelling and memory. The Guardian review and rental opportunity are here. It probably won’t any longer be on cinema release by the time you read this, but it’s a film that won’t suffer on the small screen, so rent it now. Unmissable.

Life and death: Pompeii and Herculaneum

This show, at the British Museum until 29 September gives a great picture of everyday Roman life, from a carbonised loaf and delicate bronze colander to a terracotta dormouse-fattening jar, with ledges inside for food and water. See a gold ring pulled from a sewer, pieces of a wooden ceiling discovered on the beach in the 1990s and heart-rending casts of people caught up in the eruption. You’ll have to queue up for a day ticket or buy membership to see this now (advance tickets are sold out), but it’s worth it.

Recommendations, for the Fringe and the web

For those going to the Edinburgh Fringe, Nathan Penlington’s Choose Your Own Documentary looks amazing. My new favourite website is Memrise, which has been helping me trepan those pesky separable/inseparable German verbs into my cranium. OnePieceofBleach is an excellent resource for anime without ads. Yes, it’s illegal.