Come and hear tomorrow’s authors today. The Vanguard Readings are a free monthly event where new and established authors showcase their writing to an open audience. If you fancy hearing from the next big name, come along to The Bear Freehouse in Camberwell. Full details are available on an open Facebook link: www.facebook.com/vanguardreadings 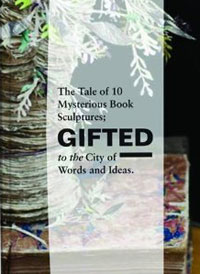 A friend sent this little treasure about a series of 10 book sculptures which inexplicably appeared at cultural venues throughout Edinburgh during 2011. Turns out an anonymous artist gifted them to the city “in support of libraries, books, words and ideas”. Clever, exquisite, astonishing things – unique tributes to print. 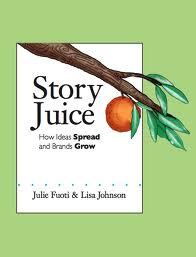 StoryJuice: How Ideas Spread and Brands Grow by Julie Fuoti and Lisa Johnson

Let me start by saying this is a free PDF book downloadable from storyjuicing.com. Grab it and give it a look by all means, but you might prefer the podcast version available at accidentalcreative.com, where Lisa Johnson goes into more detail on the power of stories. Definitely worth a listen (as is quite a bit of stuff on Accidental Creative).

SPARK is London’s first true storytelling night. Expect the unusual, the hilarious, the tragic and the heart warming. Storytellers have included teachers, car dealers and barristers – anyone with a story to tell is welcome. There’s one curated night and two open mics each month plus a weekly podcast. http://www.sparklondon.com/

Mark Rylance is magnetic. On stage, he’s all you can see. His Richard is petulant, comical, repulsive. He sucks his bride’s fingers, he struggles to walk under the weight of his marital robes, and when he turns, he’s ferocious, a psychopath. I missed Kevin Spacey in Richard III at the Old Vic so have no comparison to make. This all-male version of Richard III is a tour de force. It’s full of wit and laughter. From now on, I want to see everything with Rylance in it. The same cast are performing Twelfth Night, with Stephen Fry’s star turn as Malvolio. And both plays moved to the West End from The Globe.

Come along to an inspiring evening of women writers at the Free Word Centre, 6th December 2012. Wrap your winter hands around a glass of good wine. Tuck into canapés and conversation. Let the wordswomen wow you: Gillian Slovo (our star at Wordstock 2011), Abi Morgan (which fabulous film did she NOT write?), Kamila Shamsie, Lisa Dwan and Melissa Benn. The event is a fundraiser for The Maya Centre, so think of the tickets as a donation, starting at £35. Click here for more info about what’s what. Or go straight to eventbrite to buy your tickets now.

The Wild Places by Robert Macfarlane

A latter-day Thoreau, the young travel writer and Cambridge English don sleeps out on Britain’s uninhabited islands and mountain tops, in its deep woods and remote moorland places. He writes profoundly and exquisitely about the importance of wilderness and our relationship with it. A truly beautiful book.

This is a play about love and the stars. It’s the warm-hearted tale of boy meets girl, with a twist. Mariane, a quantum physicist played beautifully by Sally Hawkins (she shines) meets Raph Spall’s Roland, a bee keeper and they start a relationship. Or do they? The concept of parallel universes is deftly illustrated with scenes being repeated with different endings. The play is only 70 minutes long with no interval, so plenty of time for a dinner date afterwards. How civilised.