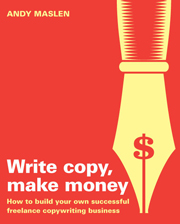 Andy Maslen’s new book is a helpful, thoughtful guide for anyone venturing into the world of freelance copywriting and a refreshing tonic for those of us who have been at the game for some time. It covers everything from ‘Taking the plunge’ into life as a freelance writer through to how to sell your services. Along the way, he provides sound advice on setting up your office, pricing your services, salesmanship, estimating, negotiating, working with designers and other pursuits that are discussed rarely in print but form an essential part of our working hours.

The sections on ‘getting to £100,000’ and ‘the single biggest mistake you can make’ offer particularly valuable insights, but I’ll leave him to impart the ideas rather than spoil the impact by repeating his advice here. I agree with much that Maslen suggests, although I think he over-simplifies the role of day rates in fees and budgets. The day rate can be an enormously important tool for setting expectations in the mind of a prospective client and positioning yourself within a project/organisation – before, during and after estimating a fee. It can also act as a simple unit from which to extrapolate an overall budget for a job. In other words, you need days + day rate to get close to an initial figure for a project budget. I also think it would have been helpful to underline the importance of generating very strong demand for your services, because the more the phone rings with invitations the more selective you can be about which projects you take on and how much you charge. The worst starting point for negotiating fees is an empty diary.

I’m not keen on the interviews that fill the final section of the book. With a few exceptions (most notably an excellent contribution from 26er Tom Albrighton), these pieces seem under-edited and lacking in detail and substance. The writers chosen represent a fairly narrow band within copywriting, and some fail to say anything interesting or unexpected on the subject of the book. A more diverse range of interviewees, stretching questions and some really sharp editing would have made this part a very helpful resource. That said, ‘Write Copy, Make Money’ should prove very useful to many 26ers. Hopefully this will be reflected in the next 26 Wordsworth Salary Survey. Tim Rich

True Stories Told Live is a simple idea. A bunch of people having a drink in a small room, listening to other people telling true stories. It’s not comedy, though it’s allowed to be funny. It’s not educational, but you might learn something. It’s not musical, but it includes the odd story-telling musician… and it often makes me cry. It happens once a month at the Salmon & Compasses in Islington, North London but it’s launching in Cardiff and Brighton too. Helen Jones

This is fantastic. A brilliant thriller, superbly plotted, completely believable characters, it’s a joy to read a book by an author who is at the top of his game. Martin Lee 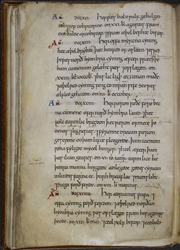 Three things I learned today at Evolving English, the British Library’s engaging new exhibition about the English language. In ‘Summer is Icumen In’, the 13th century Middle English song, a buck ‘farteth’. This is the first appearance of that august verb in print. The precursor of the British broadsheet newspaper was the ‘broadside’, a large single sheet of paper pinned on a wall to announce an event. (A report from December 1831 describes the execution of two murderers – “when the world closed upon them for ever”.) And the word ‘snog’ first entered the dictionary in 1945. Fiona Thompson

Go see the James Turrell exhibition at the Gagosian Gallery on Britannia Street near Kings Cross. It’s a sort of light room environment type thing – very trippy. You’ll like it. And it’s free. On till Dec 10. Roger Horberry 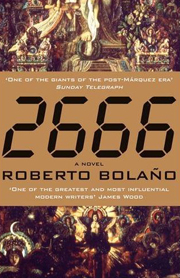 Bolaño — or rather a character — or more accurately a character wearing a mask of Bolaño’s creation — puts it nicely: “The secret story is the one we’ll never know, although we’re living it from day to day, thinking we’re alive, thinking we’ve got it all under control and the stuff we overlook doesn’t matter. But every damn thing matters! It’s just that we don’t realize. We tell ourselves that art runs on one track and life, our lives, on another, we don’t even realize that’s a lie.” 2666 is every damn thing: terrifying, tender-sore, compassionate, all-encompassing. It is coruscating, opalescent, epic and, I say, inviolable. Shano Cotechini 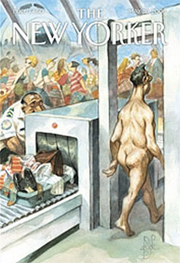 Though it’s been around forever, I’ve only just started picking up the occasional copy New Yorker to read on the train. It’s the perfect size, a bit bigger than A5, foldable, eminently portable. But it’s packed with wit, ideas and incisive writing on everything from politics to technology, culture to history. I enjoy a different voice and a different perspective from the usual suspects this side of the pond — particularly Malcolm Gladwell, who’s always got something interesting to say. And of course the cartoons and illustrated covers are impeccable. Jim Davies