From a book that will make you get out more to Grimm Tales in a basement, 26ers offer their recommendations for spring.

Books for the future

Man Booker judge Richard Gekoski said on Radio 4: “If you’ve read everything in your library it’s like a mausoleum – it’s your past. I want the books on my shelves to be my future. I like to walk through my house and be tempted by things on my own bookshelf.”

A conference/lecture/do in February, dedicated to all things story, organised by those clever people at Hoxton St Monster Supplies (i.e. The Ministry of Stories). Highlights included Gruff Rhys of Super Furry Animals telling us about his ace travelogue about seeking welsh-speaking American indians, Alan Rusbridger (editor of The Guardian) and poet/playwright Stella Duffy. Good to the last drop.

My tips for April 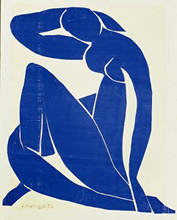 1. Henri Matisse:The Cut-Outs at Tate Modern. I love these exuberant, vibrant works by Matisse, done in his later years when afflicted with bad eyesight he took to “painting with scissors.”

3. Enfant terrible designer Jean Paul Gaultier is being honoured at the Barbican with an exhibition of his wild clothes, runway footage, music videos and dance performances. Get in the mood by watching this funny on-line monologue from the daring, avant-garde Parisian designer. 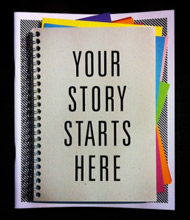 How to be an explorer of the world

For writers who need to get out more (myself included), this is just the book to get you looking at things differently. Choose a project at random, do some fieldwork, collect things… then put on your own exhibition. Handy ‘Random Experience Generation’ pills included, as are worksheets to document your experiences and tips on tools and methods for collecting.

Maybe we could aim to put on exhibition at this year’s Wordstock?

I haven’t read Austin Kleon’s books that Brain Pickings has highlighted but this looks like it’s in a similar vein/style.

A few months ago, we ran a piece on our favourite notebooks, and I sang the praises of Leuchtturn1917. They’ve just released a new notebook in collaboration with stationers Whitelines, which is very clever indeed. Once you’ve made your notes or doodles, you use an app on your phone to take a picture. And here’s the brilliant bit… the app removes the background lines, straightens your text and sends your notes/drawings to your Dropbox, Evernote account or email. You’ve then got it stored digitally and don’t have to spend ages rummaging through your notebook to find it. Genius.

The app is called Whitelines Link and is free from the Apple App Store or Google Play.

And you can get the notebooks in various sizes here. 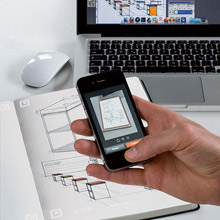 Best of the web

Read: http://aeon.co/magazine/ – “an online magazine of ideas and culture”

Listen: http://www.radiotopia.fm – “a collective of the best story-driven shows on the planet”

Use: https://www.dotdotdot.me – “much more than a digital reading app…”

Catch Dale Chihuly’s extraordinary underwater seaforms sculpted in glass at the Halcyon Gallery. On until 21 April.

My recommendation is Philip Pullman’s Grimm Tales, an extraordinary processional theatre piece in the basement of Shoreditch Town Hall (until 24 April).