From ballet and books about actors to feel-good films and documentary festivals. 26ers offer some of their favourite things for you to enjoy.

Beasts of the Southern Wild at the Barbican

First time director Benh Zeitlin astounded everyone in 2012 with his indie film Beasts of the Southern Wild, and his young heroine Hushpuppy. Worth catching it at the Barbican July 30 and 31 at 7:30pm when it’s screened to a live score, featuring Dan Romer, Zeitlin and the Serious Orchestra. It’s especially poignant as we read about Typhoon Neoguri and the devastation it is causing to Okinawa Island, Japan. 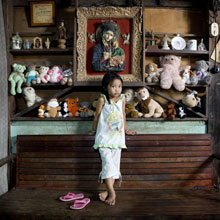 Childhood has been a recurring theme at 26 lately. Italian photographer Gabriele Galimberti traversed 50 countries seeking out children and their most beloved, most loyal friends – their toys. See her photographs of 21 children from different social backgrounds and their toys. At the V&A Museum of Childhood, July 8-Dec 14, 2014.

‘The Cannes for documentary people’

For those 26ers who are keen on documentaries, especially the writing or making of them, I can’t recommend highly enough the Sheffield Doc Fest. It’s been called the Cannes for documentary people. This year it was on from 7-12 June. It used to be held every November but moved to June in 2011 and that was a brilliant move. The Guardian’s Danny Leigh said, ‘With the evening instantly lengthened and the sun dappling the Yorkshire rooftops, it felt like the cosmos was smiling on an event that had a hugely upbeat atmosphere.’ Mark your calendar for when it comes round again in 2015.

Nederlands Dans Theater (NDT) – contemporary ballet at its best. Their latest visit to London involved work set to for the lyrically rich 69 Love Songs by The Magnetic Fields.

And for the future, how about a complete pointless request for tenuous connections between 26 and other numbers in print or song. So 69 less 26 is 43 and the tenuous link is Barbie and Ken.

I was at a wet, windy, stormy and eventually sunny Glastonbury festival just a couple of weekends ago. On Sunday afternoon, I headed to a packed poetry and words tent to listen to Michael Rosen. He performed some of his greats including my favourite, Chocolate Cake. It was one of my festival highlights. The whole atmosphere, with children and adults reciting lines lines of poetry, was charming and refreshing. If you ever get the chance to see Michael Rosen, take it. Here are some of his upcoming events.