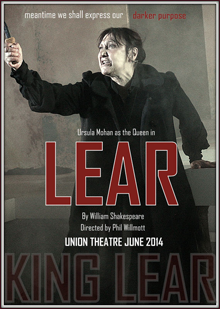 My BIG recommendation this month is ‘Lear‘ at the Union Theatre under the arches in deepest Southwark. I’d already seen the posh and pricey NT version, and though Simon Russell Beale’s performance is deeply moving I found the production a bit too self-consciously impressive with its familiar wartime tropes and fascist architecture.

Lear at the Union is anything but classical. Lear is played as a woman – a vicious, willful and withholding mother who brings a whole new spin to her relationship with weary, embittered daughters whose role is to play up to her increasingly petulant demands.

More than this, the tiny audience wanders about onstage with the actors; guests at the cocktail party from hell and later at a war council meeting that turns into a bloodbath.

All this and the weirdest men’s toilets you’ll see this side of Sweeney Todd (I know, I’m a girl – but I peeked…).

‘Let the Right One In’ at the Apollo Theatre, London.

It’s the stage version of John Ajvide Lindqvist’s Swedish horror novel and film (adapted by Jack Thorne). It’s a love story wrapped inside a dark and chilling horror, and accompanied by stunning music from Icelandic composer Ólafur Arnalds. It had me on the edge of my seat the entire time. In fact, I enjoyed it so much that I’m tempted to go and see it again.

Here are my favourite things this month.

1. A View from the Bridge at the New Vic. I hope it gets transferred to the West End and then you must see it. Stunning and sad.

2. Matisse Cut-Outs at the Tate Modern. The power of the scissors.

1. I can’t wait to see Skylight at the Wyndham Theatre with Bill Nighy and Carey Mulligan. Two compelling talents on one stage.

3. I dream of sitting in the shade barefoot on a quiet terrace in Umbria and reading Still Writing: The Perils and Pleasures of a Creative Life by Dani Shapiro. Her latest book, considered one of 2013’s best books on writing and creativity, has gotten terrific reviews for being beautifully crafted, deeply honest, personal and full of universal truths. I love this quote: “I try to remember that the job – as well as the plight, and the unexpected joy – of the artist is to embrace uncertainty, to be sharpened and honed by it. To be birthed by it. Each time we come to the end of a piece of work, we have failed as we have leapt – spectacularly, brazenly – into the unknown.”

The root of the story

‘Into the Woods’ by John Yorke is a stunning book on the structure of story, written by one of the most eminently qualified people in the country – an ex head of both BBC and Channel 4 drama. The book is a superb master class on how story works, but it’s never academic, and is littered with examples from highbrow, middlebrow and lowbrow culture, and from TV, film, theatre, myth and novels. It does no harm that it’s very well written and amusing as well as insightful. If I had a 26 superpower, it would be to make it mandatory for all of us to read it.

I’m reading ‘Fallen’ by Lia Mills (Penguin). WW1 and the Easter Rising both feature in this memorable story of a young Dublin woman trying to her place in a world where everyone knows their station. “The truth of it was that I didn’t know what a person like me was for.”

‘The Circle’ by Dave Eggers

Don’t read this book last thing at night. You won’t sleep for worrying about information overload, the death of privacy and world takeover by allegedly benign corporations. This is the story of Mae, a new recruit to Circle (a thinly-disguised Google), and what she learns when she’s inside the belly of the slick silicon beast. Don’t have nightmares. 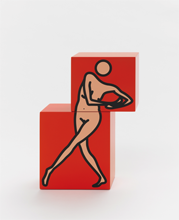 Two quite brilliant exhibitions in Bath – worth travelling from anywhere. At the Victoria Art Gallery Radev 2 and at the Holburne Museum a real treat from Julian Opie, his own work and works he’s collected. I’m just off to see them again.

My top tip is Alan Bissett’s new play ‘The Pure, The Dead and The Brilliant’, which will be staged at the Assembly Rooms from July 31st during the Edinburgh International Festival Fringe this year. Steeped in Scottish folklore and staged in the run up to the Independence Referendum, he’s one of Scotland’s most exciting dramatists – it’s a rambunctious, rallying-call of a script. 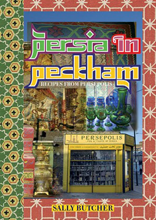 A deli in Peckham

Iran’s been in the news a fair bit lately. Will Obama or won’t Obama, the Shia, the Sunni, etc. Sometimes we forget what a glorious history, arts and literature it has and how far back its civilisation dates. As a child I read about Darius the Great and his invasion of Thrace, and Nebuchadnezzar III’s Babylonian revolt. It set me thinking how much I want to dedicate the cheerful month of June, my namesake, to all things Persian. And I hope some of you will join me in it. Here are some things we could do:

1. Visit Persia in Peckham. There’s a well-kept little secret on Peckham High Street called Persepolis run by the flame-haired Sally Butcher, author of two critically lauded Persian cookbooks. Her husband’s Iranian and she speaks Farsi. I love the amazing little deli in there.

2. Use Persian saffron in your carrot cake.

3. Watch Mania Akhbari’s film ‘From Tehran to London’ (2012), shot Cassavetes-style about the disintegration of a marriage. She escaped arrest in Iran to finish it and lives ‘in exile’ in the UK.

4. Read Kamin Mohammadi’s lyrical novel ‘The Cypress Tree’ about the lives of three generations of women in 20th century Iran.

Traveling southeast from Iran to India, I enjoyed seeing Fearless Nadia, Bollywood’s first female action heroine, and the darling of Indian cinema in the 40s and 50s. Last month at the Southbank I watched a wonderful screening of one of her films, ‘Diamond Queen’ (1940), to the live accompaniment of the 12-strong ensemble of Ben Walsh and the Underground Orchestra. Indian classical musicians played beside western ones to a scintillating score composed by the multi-talented Walsh. The best thing about Fearless Nadia is that she’s from Perth and her real name is Mary Evans. Check out India’s first feminist on celluloid by way of Australia and look her up.

And don’t miss Phyllida Lloyd’s all-female cast in her staging of ‘Shakespeare’s ‘Henry IV’ at the Donmar Warehouse opening October3rd. 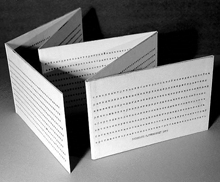 2: Has digital publishing changed everything? Live tweets archived from an event archived via the Guardian.

3: Provocation: what formulas do you use in your work? What would it mean to break those formulas? Listen to designer Martina Flor’s tips.

Just in case it’s worth a trumpet blow on the site! (And of course in case any fellow-26ers have suggestions for the trip.)

Clarence Darrow’ at the Old Vic was magnificent. Kevin Spacey in a one-man play about a lawyer who represented the vulnerable. Stunning performance that had the whole audience immediately and spontaneously on their feet at the end for a standing ovation, a real theatrical event. But if you’ve missed that ‘House of Cards‘ (now on series two) starring Kevin Spacey fills the time nicely between football matches.

A moving tetraptych by Bill Viola: four ‘martyrs’ hung on a church wall, being silently blasted and buffeted by grit, wind, flame or water. I watched it over and over, as each one attained radiant stillness – or heavenly assumption on a rope.
PS There’s something Beckettian here, beyond the human in a pile of dirt.