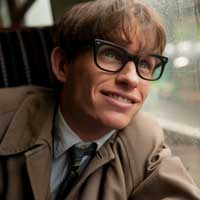 The Theory of Everything

The Theory of Everything is my recommended viewing. Not a great film but a stupendous performance by Eddie Redmayne. Deserves the Best Actor Oscar and Boyhood the Best Film.

It’s increasingly rare to see a film that reminds you of almost nothing else you’ve seen, and that’s almost reason enough to watch Birdman. But there’s more; superb performances from Michael Keaton and all the supporting cast, a very funny script, a great set, and a fair amount of mystery and imagination. A terrific watch.

The Miniaturist by Jessie Burton

This is such a compelling story. It starts with Nella, aged 18, arriving at her new husband’s canal-side house in Amsterdam in 1686. You’re immediately drawn into a world of wood panelling and whispers, and a mysterious miniaturist who seems to know people’s secrets. I finished it at 3am this morning and already want to re-read it.

I’ve been listening to Timberlake Wertenbaker’s 10-hour adaptation of Tolstoy’s War and Peace on Radio 4. It’s one of those must-read classics that I’ve never read (and never will). This is wonderful stuff, perfectly suited to the radio. Broadcast on New Year’s Day and available for just four weeks.

My pile of unread books on the floor next to my bed is small because I just read feng shui bedroom tips and chief among them is removing clutter. It frees the mind. While my bedroom may be energetically rebooted, my slim kindle is jam-packed with unread books that one person or another has recommended to me. Here’s a small sampling of my electronic clutter: Marching Powder about a notorious prison in Bolivia, Amy& Isabelle by Pulitzer prize author Elizabeth Strout (my friend preferred this to Olive Kitteridge), I Am Pilgrim by Terry Hayes which is supposed to be a real page turner, and a slew of others – Lila, The Days of Abandonment and We Live in Water. My favourite read last year (since I am sure that’s your next question) was Americanah.

I know it’s not until May, but the Boswell Book Festival in Scotland looks interesting. It’s touted as “the world’s only festival of biography and memoir.” I have been travelling for the past three weeks in SE Asia so not as up on London as I should be, but I can highly recommend visiting Laos, Cambodia and Vietnam for those who want to “changer les idees”. Read my blog to learn more.