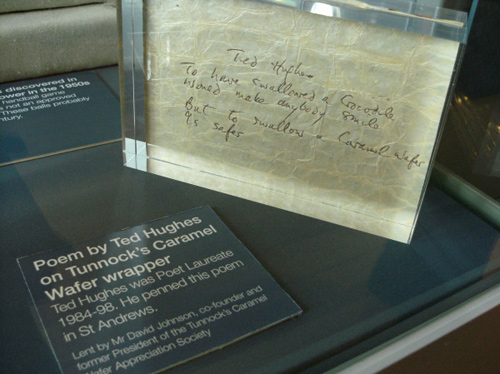 To have swallowed a Crocodile
Would make anybody smile
But to swallow a Caramel Wafer
Is safer.

25 years ago, then Poet Laureate Ted Hughes was tucking into a Tunnocks bar when he decided to open the wrapper and write a poem on it.

The poem, now on display in the University of St Andrews, is the inspiration behind a new project by 26 member Nick Asbury. Called WrapperRhymes, it’s a growing collection of poems written on wrappers.

You can see the collection on the website, beautifully designed by Greig Anderson at Effektive. So far, it includes Galaxy bars, Chewits, Sherbet Dip Dabs and Highland Toffee, among many others.

Nick says of the project: “There’s something nice about the direct relationship between the poem and its physical expression on the wrapper. It means each poem is a one-off – only one copy of it exists. Many of the submissions have been good fun tributes to their product, but there’s also scope for more oblique and personal poems. Maybe there’s a masterpiece waiting to be written on a bag of Wotsits.”

The project is open for submissions. http://wrapperrhymes.tumblr.com/submitwrapperrhyme