In our 26 Writers in Residence project, we asked 26ers to find a place that’s overlooked or everyday and bring it to life. Irene Lofthouse shares her experience of being writer in residence at Apperley Bridge, Bradford. 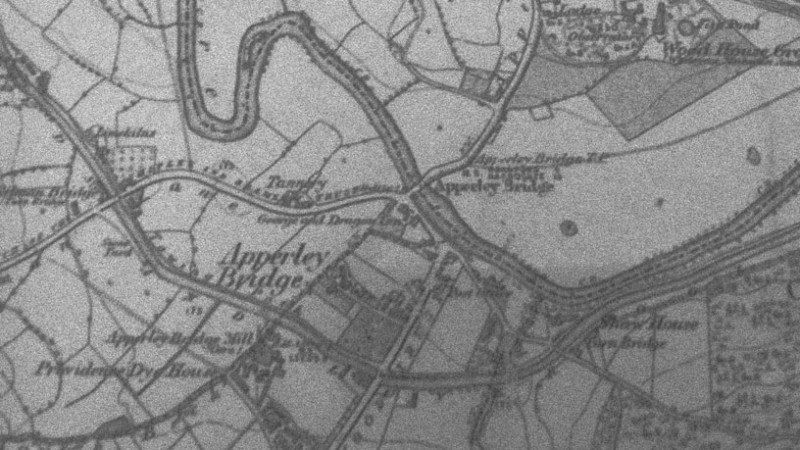 By ek, there were twists and turns on this 26 project.

The initial idea of relating the Turnpike riots of the late 1790s at Apperley Bridge, Bradford (or is it Leeds?) through a short film seemed so easy at first.

Research at local studies library; a script in Yorkshire dialect; the pub of the time still open and functioning; access to the river and bridge where the toll-house stood easy to get to; a photographer available to collaborate and a cast ready to rock up as the camera rolled.

Script in dialect. Tick. Translation of script for those not fluent in t’Northern tongue. Tick.

Pub visit to decide which snug corner near the open fire to use for Scene 1.

Herewith began the unravelling. No snug. No open fire. No ancient oak tree trunk in the middle of pub that was mentioned back in the 1700s and beloved of generations. Gentrification on a large scale. No tick. Plan B.

Ambling along paths I’ve known since a child to decide the location by the River Aire and the old Apperley Bridge for Scenes 2 and 3 gains a tick UNTIL: Road closure signs for construction work as a new housing estate (or detached development dream) loom at me at the two roads we’d need to unload kit and props. No tick. Plan C

Having agreed a date with the cast, thinking it would be easy-peasy and we’d have a fun time in the pub before decamping to the riverside – Plan C meant a total rethink as none of the locations were available to us.

Scene 1, references to ‘tools’ in script: An image of a collection of Tony’s tools

Voice-over of Scene 1 only. By members of Shipley Little Theatre (who had 10 mins to rehearse, so in effect, a sight-reading, hats off to them and big thanks) as the original cast were busy with other projects.

I learned a lot completing this project. About being more effective in my planning. About how collaborating means rethinking and re-framing. About how a visual approach is different to a performance/spoken word approach. About how a collaborator can feel when their work is tampered with and the work isn’t acknowledged. About challenging that.

About whether I have the skills to realise another collaboration in this way. Food for thought.

And I didn’t find any of the apples in a clearing that give the name to Apperley Bridge.

Listen to Irene’s finished piece and take a look at all of the responses on the 26 Writers in Residence website.