The story behind Unknown Matron’s Mallet 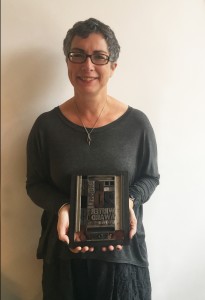 Congratulations on becoming 26’s first project writer winner. How does it feel to be an award-winning writer?

Winning was a complete and delightful surprise – not only because I didn’t know I was nominated but also because this is the first poem I’ve ever made public. There are plenty of others in my notebooks, most pretty broken affairs. Winning has made me feel maybe I should get to work on them and send them out.

You won for your sestude, Unknown Matron’s Mallet, which the judges said was assured, understated, profound and poignant. Which project were you writing for?

I was writing for 26 Pairs of Eyes based at The Foundling Museum in London. The museum describes the lives of the Foundlings left at Thomas Coram’s Hospital from 1739 till the mid-20th century. It contains everything from ornamental plaster ceilings to the uniforms worn by the children. 26 writers were allocated an object and asked to write a sestude. I just hoped I didn’t get one of the tokens left by a mother handing her child over to the Foundling Hospital because I knew it would be so hard to avoid being sentimental. So when I was handed a slip of paper naming the matron’s mallet as my object, I was delighted.

Had you been involved in another 26 project before?

I wrote a piece for 26 Miles, describing the final section of the London Marathon route. I collaborated with photographer Mark Cocksedge and it was a very different kind of writing because it was based on our experience of accosting passers by in St James’s Park and asking why they were there.

What were your initial thoughts when you were paired with your object?

I wanted to find out as much as possible about the mallet. I love research and was rather looking forward to rootling around in dusty archives, but it turned out that the museum knew next to nothing about the mallet and the archive was bare. It’s probably made from a fruit tree’s wood. That’s pretty much all we know. And it could have been used by every matron in turn – like a badge of office almost – or belonged to one matron in particular. I was frustrated at first at knowing so little, and then I felt liberated. I didn’t feel that I could write what I wanted. I definitely didn’t want to invent facts but I could explore my own relationship to the object and what it made me feel.

How did you find the writing process? Did the words come easily once you had your object or did it take a while for inspiration to strike?

I wrote a heap of lines and collections of lines just to get started, just throwing them on the page and seeing what came up. Gradually the poem’s themes and images emerged and I began to shape them into some kind of whole. I have no idea how many drafts I wrote – masses and masses, some wildly different to see what might work, and others only slightly altered from a previous version.

How did you find writing in this form? Was the constraint of 62 words too confining, or liberating?

I love working like this. I started out as an editor and am always happy moving words around, cutting and shifting commas. I wrote most of the poem while staying with friends in Greece (sitting fully dressed under a duvet because their heating broke and it was only 1 °C inside and out) and finished it on the plane home, with a very puzzled-looking Chinese man reading over my shoulder. I like a deadline but I did cut it a bit fine!

I’m a freelance copywriter and I’ve just finished the first draft of my first novel.

How does this type of creative writing help you with your business writing?

I’m sure they feed each other. Writing poetry is all about concision and precision, and finding images and language that surprise or move the reader. The same goes for writing copy, though there’s less scope for ambiguity or shades of meaning. Being a copywriter means I’m never precious about what I’ve written. If it doesn’t work, it goes, and that’s an excellent thing in any form.

What would you say to anyone thinking of taking part in a 26 project?

Go for it – you may surprise yourself. I did!

Through glass
I run my finger along its grain,
picture the tree the mallet came from,
the fruit it bore.
I see a man cut one branch,
turn and balance it, carefully,
the better to be held in a warm hand,
the better to keep silence,
here among the hundreds of breaths
that cloud the glass
in this room of rootless children.