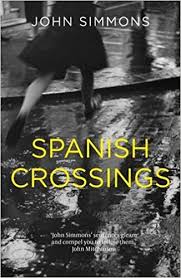 Elena Bowes talks to our very own John Simmons about his new novel, Spanish Crossings.

In Spanish Crossings we only meet Jimmy as an adult in the prologue and epilogue, a very neat tactic to introduce and bring closure to the main characters in your historical novel. Had you always planned that literary device or did it come to you after you had written much of the main body of the novel, which takes place nearly fifty years earlier during the Spanish Civil War?

The Prologue came first. I was in Spain to run a Dark Angels course. I must have been thinking about my family connections with Spain and the civil war, and I dreamed the opening sentence “Mother declared herself happy”. Who was Mother? Why was she now happy? What is happiness? I wrote the Prologue, set in the 1980s, while walking around Seville; I read it at the Dark Angels gathering, then knew I had to develop it when I returned home.

The story that developed from this back-story was, as you say, set fifty years earlier, before Jimmy was born. Who was he? Another strand of the story. When my first reader (my wife Linda) read the novel’s draft, she felt it lacked something at the end. I knew she must be right so I wrote the Epilogue in Jimmy’s voice, matching the Prologue.

It certainly worked for me as a literary device, and I’ll use it again. But of course there are many other ways to approach writing.

Character, place, plot or something else – what consumed you most before you began this novel?

That opening sentence, arriving magically, drove everything because it led to the characters, places, story and even the theme. Once I started I became more and more conscious of the need for structure. So I decided very early that there would be three parts: the time before the second world war (1937), the war itself (1943), then the immediate post-war period (1947). I created a story outline using those three parts, and then populated the structure with characters, events and specific places.

And during the actual writing of the novel- what were your biggest challenges?

Just making everything fit, particularly as the characters started to develop a life of their own. I loved that feeling of the characters growing and almost becoming independent from me, so I needed to encourage their growth while keeping to the constraints of the story itself. Dialogue is always a big challenge in fiction – I used to hate writing it but now I love it. It’s the best way that characters reveal themselves, and perhaps all that work in my career on ‘tone of voice’ paid off in fiction too.

Your parents, Jessie and Frank, adopted an evacuated boy, like Lorna adopted Pepe in Spanish Crossings. How much of this story is autobiographical? Harry James of the International Brigade, Lorna’s only true love, was he based on anyone in real life?

You’re right that there is a family story as the inspiration behind this novel. But I would say it is not autobiographical. Lorna is not Jessie, Pepe is not the real Basque boy adopted by my parents. Frank is not Harry of the International Brigade – otherwise I might not be here today as the chances are he would have been killed. The International Brigadeers were remarkable, idealistic young men – including people like George Orwell and Jack Jones who survived to do great things – but Harry is not based on any of them.

Although not directly autobiographical I felt a powerful connection to my parents (who had died when I was a relatively young man). Writing the novel became a way of knowing them better by being in these places and meeting these people that might have been part of their lives at that time. All before I was born.

How did you figure out how to weave something as major as Guernica into the novel without it looking forced? The Whitechapel exhibition of Picasso’s Guernica was perfect – mixing a real-life local London event with something of huge historical significance. Did you come across the Whitechapel show in your research or had you always planned on inserting that in the novel?

Guernica was my biggest worry. I wanted to be authentic to the history, so it’s the part of the novel I researched most. I felt a responsibility to get it right, and that also meant going to Guernica, seeing the few surviving buildings from that time and visiting the Museo de la Paz there. I hope the letter device is not forced, but I had always imagined Harry as a character who had been there and was able to give an eye-witness account. This seemed the most natural way for him to do that – many of the International Brigaders were working-class auto-didacts like Harry.

The painting by Picasso also drove me. A print of it was in my home when I was growing up, framed by my dad, and now it’s in my study so I see it every day. When I discovered through research that the Picasso painting had been displayed at the Whitechapel in 1939, I knew I had to include it in the story – particularly when I read that the admission price had been ‘a pair of boots’.

What tips would you give to a writer aspiring to write a historical novel?

You have to feel a real, deep connection to the historical period. I feel that with the 20th century but I don’t think I could write like Hilary Mantel, for example, about Tudor times. For me the 20th century setting made my research more compelling because I could walk through places that still bore a resemblance to the places I needed to describe. That was essential for me: going to Guernica, Bilbao, Hendaye (French border town) I could imagine how they had been. But, funnily enough, the most important places in terms of stimulating my imagination were in London. Most of the novel is set in central London and it was fascinating to research the differences between now and then. So – research from books but visit the real places if you can.

How vital do you think it is for a writer to spend a good amount of time in the place they’re writing about?

It was vital for me, for the London scenes as I said, for the Spanish ones, and perhaps most of all for the French scenes at the end. Hendaye is a town on the French/Spanish border that I had read about – a transit town for the International Brigaders, the location for the British consulate during the Spanish Civil War, the place where Hitler and Franco had a (fortunately) unsuccessful meeting.

So I went there primarily to get the atmosphere, to see some specific locations and to understand the geography. Hendaye faces Spain at a river estuary flowing into the Bay of Biscay. I had read of people meeting on the sand banks of the estuary at night and this had suggested the final scene to me. I needed to see it even though Hendaye is now much different from then – but the geography is the same.

When conceiving your main character Lorna, what traits did you think she must have?

I had established certain facts about Lorna in the Prologue – her anti-fascist resistance, and ambivalent relationship with Spain, her commitment to a cause. So those qualities must have been present in her younger years. Now it was case of putting her in situations that might have formed her character. Even so I was surprised – in a positive way – when I felt her growing into a character that readers seem to relate to strongly. She is the centre of the book so she needs to be a powerful, admirable character.

And plot – how did you structure it – all in one go, or did it evolve as you wrote?

The outline plot was established early but of course it developed within that structure. There are all sorts of story lines that took me by surprise as a writer. Like the Whitechapel chapter, and the boots. Like Lorna’s relationship with Pepe. Your characters lead you and you have to give them their head, to go where they naturally want to take the story. But it was all within a fairly tight structure so there was some creative tension, and perhaps that added to the drama from the reader’s point of view. If there were surprises for the writer, these must be surprises for the reader too.

This is true, I am now about 70,000 words into The Good Messenger. I am loving the process of writing it just as much as Spanish Crossings even though the story is less personal. There are personal elements though – the First World War saw the death of my grandfather 100 years ago. But I didn’t want to write another war novel, there have been many about the First World War. The first part is set in 1912, the short second part is on Armistice Day in 1918, and the third part in 1927. Part of what I want to do is explore the changes in society, life, politics and people brought about by the war. There’s an enormous difference between the world in 1912 and 1927, and it’s fascinating to write about this through characters who embody that change.

I would never have thought of myself as a historical novelist until someone remarked about my first novel Leaves “ah, you’ve written a historical novel”. It was set in 1970, in my lifetime. I suppose that planted the seed that I could write a historical novel set further back in time. Perhaps with the state of the world at the moment we need more than ever to be aware of history. And Spanish Crossings suddenly had resonances with events today: the impact of war on civilians, the refugee situation, the rise of nationalism, the need for hope and creativity to resist the political darkness. I find those things easier, and more powerful, to write about from a historical perspective because we are too immersed in the present to see them with clarity.

I’m an Arsenal supporter but that’s not much fun this season. I run every day as the first thing I do and that gives me the cover to enjoy food and drink. A French restaurant meal with red wine is certainly fun. Travel is wonderful. And of course I enjoy reading and music – it was a sad day for me when Leonard Cohen died last November.

Get your copy of Spanish Crossings here.