Introducing The Other Box 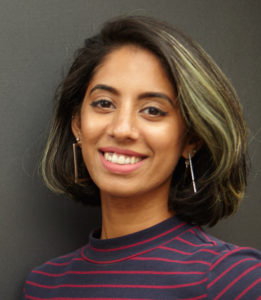 On 1 November, 26 is teaming up with The Other Box and Wonderbly to put on an evening of inspiring talks delivered by people from minority backgrounds. We caught up with Roshni Goyate, co-founder of The Other Box to find out more about the platform’s mission and what to expect from the event.

You’re a freelance writer, an MA student and you’ve started your own platform, The Other Box. How on earth do you fit it all in?

A nifty combination of determination, dedication and meditation. I’m in love with everything I do, so it’s easy to find the drive. When it comes to having enough hours in the day, I’ve got very good at planning ahead, being realistic and factoring in down-time too. A daily practice of meditation, yoga and mindfulness helps me stay focused and calm. I’m also very grateful to have Leyya Sattar as my co-founder with The Other Box; she’s the queen of making things happen.

Why did you set up the Other Box? And what’s the mission?

As a freelancer, I’ve walked through the doors of countless agencies to discover I’m the only person of colour on the creative team, and sometimes in the entire office. When I started digging deeper, I found that juries for big-time industry awards, panel line-ups for premium ticketed events and leadership teams at agencies were also lacking something. They were all white and all somehow still okay with that. This lack of representation and diversity was stifling for me and I even considered switching careers because I felt like I didn’t belong. That’s kind of tragic, because I love what I do, but I felt excluded, which affected my confidence and creativity.

So with The Other Box, we’re raising awareness of these issues and also giving a platform to other brilliant people of colour within the industry who otherwise might not get the chance to shine. We want this greater visibility to inspire people to stick with it and excel in what they do. Of course, better diversity is also great for creative teams when it comes to fresh thinking and innovation.

Your Co-Founder is Leyya Sattar. How did you two meet and come up with this brilliant idea?

We met through a mutual friend (our guardian angel, Amiera!) and were both sat in the audience of yet another ‘diversity’ talk that had no women of colour on the panel. We decided we were done with feeling invisible and silenced in the diversity conversation, and pretty much a week after that event, we had set up the social media accounts and website. It was terrifying but exhilarating!

The Other Box is nearly a year old. What are some of your highlights so far? I hear you’ve won an award…

It’s been quite the year. We’ve had the chance to sit on panels, go on the radio and telly, appear in magazines, and get involved in industry campaigns, like D&AD’s We Need New Blood. And our work has been recognised through awards and accolades from We Are The City, BIMA and Creative Equals. As well as that amazing whirlwind of attention, one of our biggest accomplishment has been to get our unconscious bias workshops up and running. They’re designed to help agencies and companies create more inclusive cultures by questioning unconscious biases (we all have them). The feedback has been extremely positive and affirming, and we’ll be rolling out those workshops at full-speed in the New Year.

Have you seen any signs of positive change in the creative industry since you started The Other Box?

Yes and no. From a stats point of view, there’s still a lot to do. For example, between 2016 and 2017, the percentage of black and minority ethnic (BAME) people in advertising went down by 1%. While there are loads of amazing schemes and opportunities to get young people from underrepresented communities into the industry, we think there needs to be more work done to keep those people in the industry once they’re in. (That’s the problem I came up against a few years into my career.) And that’s why we run our unconscious bias workshops – to help create agency cultures that nurture rather than alienate people from different backgrounds. We also have a fast-growing network of inspiring, creative people of colour who are working hard towards the same goal for better inclusion and representation. We’re present and determined to make ourselves more visible, especially in senior positions.

What can we expect from your event on 1 November?

The theme of the event is the importance of seeing yourself in the story. Our three speakers, Shahnaz Ahmed, Selma Nicholls and Nafisa Bakkar started their respective enterprises because they realised that certain groups were being misrepresented and even silenced by mainstream media and culture, with potentially harmful consequences. So they’ve each taken it into their own hands to tell more authentic stories, and rewrite the narrative. It’s a simple but powerful thing to do. And I hope everyone will be as inspired by their stories as we have been.

Book your place at the free event on November 1st. The event will be held at Wonderbly. And there’ll be free pizza!