How to Slice the Transmedia Narrative Arc

Ezri Carlebach is a writer and recovering bass player who has worked in marketing, publishing and corporate communications for more than twenty years. His coordinates are ezri@starfleet.com and @ezriel 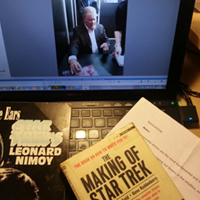 “It’s storytelling, Jim, but not as we know it,” as Spock famously didn’t say. The crew of the Enterprise – Kirk and Spock in particular – blazed a trail for a new kind of storytelling on television and then, in the hands of their, shall we say, ardent fans, went even further by appearing in an entirely new form, which laid the groundwork for today’s transmedia storytelling.

A transmedia narrative is one in which the story reaches its audience at different points through different media, and story elements in one medium are not necessarily included in another, although they may be referenced or linked. This is different to crossmedia storytelling, where you tell the same story on different platforms – the book of the film of the play, etc.

Think Lost, and the elaborate ‘mediaverse’ created around it, with its TV episodes, web-only episodes, Alternate Reality Games (or ARGs), video teasers with cryptic ‘Easter egg’ clues embedded, spin-off books by non-existent authors, and so on. John Simmonscalls this “a proliferation of stories told by different storytellers”.

It’s also what Steve Spence, who teaches transmedia storytelling at London College of Communication, refers to as “a commercial transmedia super-system. Like, for example, the corporate-driven and expensive transmedia experience of Star Wars, from the original movie trilogy to the video games, Lego toys, books, animated TV shows and fan conventions.”

“If you’re pitching an idea to Hollywood execs today, you’d better not go in with a script,” says Steve. “You need a transmedia solution. The script is just item four or five on the list. You’re not a writer anymore, you’re a transmedia producer.”

And if you’re going to build your story idea into a transmedia narrative, it must fulfil one vital condition: “You cannot break the reality. Every URL, every phone number, every document title that gets mentioned in a transmedia story element has to be backed up with content. If viewers call the number on that fake company website, you’d better have someone there to pick up the phone.”

But it all started long before the World Wide Web was a twinkle in Sir Tim Berners-Lee’s eye. It kicked off in 1967 when NBC cancelled the original Star Trek shows after just two seasons. The result was a completely unprecedented demonstration of fan power involving marches, picketing network offices, leafleting, letter-writing campaigns and angry phone calls to NBC President Julian Goodman. Eventually he relented and issued an on-air statement saying that the show would be renewed.

Having used their muscle to ensure a supply of ‘official’ Star Trek stories, some fans went one step further and created their own stories. As a group, Star Trek fans had already shown themselves to be different from other fans, according to the show’s producer Herb Solow: “I’ve never read more intelligent, thought-provoking mail as Star Trek gets… These people really follow the show. They comment on the stories, the theories advanced in the stories… everything seems to be on more of an intellectual level.” [i]

But there was another level of interest that fans had in the show, specifically in the relationship between Kirk and Spock. By the early 1970s fans had begun writing their own stories about the captain and his first officer, largely based on a perceived homoerotic element that both men and women found intriguing. It came to be called Kirk/Spock – or ‘slash’ fiction.

Soon, fans of other shows were creating their own content, exploring their favourite characters’ motives and desires, providing new narrative directions. Slicing, if you will, the original narrative arc. ‘Slash’ fiction took control of a story from the authors and producers and, in extending and enriching the characters’ lives, laid the groundwork for transmedia experiences like Star Wars and Lost.

In foregrounding fan- or user-generated content, transmedia storytelling favours a different approach to the way a story works. Writer and director Evan Boehm acknowledges this in his recent film The Carp and the Seagull, describing it as “a user-driven narrative that tells a single story through the prism of two connected spaces.”

Since the days of the Enterprise and its original mission ‘to boldly go’, the digital revolution has transformed the interaction between stories and audiences – and talking about ‘audiences’ in that passive sense has become somewhat problematic. Boehm talks about “the way technology is changing how characters and stories respond to you, talk to you, live with you, and the way that anything from social media to AR [means] you’ve got to start connecting to these characters more and more.” [ii]

It’s a strange new world for storytelling. But, as Steve Spence points out, transmedia storytelling does have a downside – “It makes playing charades really hard.”

[i] Quoted in The Making of Star Trek by Stephen E. Whitfield and Gene Rodenberry (1968) Ballatine Books: New York, NY.

[ii] Evan Boehm: The Making of the Carp and the Seagull