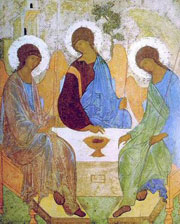 When you’re writing for design, the first thing you need to get a handle on is the dynamic between client, design company and writer. Religious analogies aren’t generally recommended, but this one seems to work. Think of the Holy Trinity. First you have God, or the client. Then you have the design company, or Jesus, God’s goatee-bearded representative on Earth. And finally there is the Holy Spirit, or writer – invisible, all pervasive, and a bit of a mystery to most.

As the Supreme Being, it’s the client who calls the shots, no matter what the design company likes to think. However, the writer generally filters his words through the design company, who’ll pass judgement (some more qualified than others), and possibly even make some amends, before handing them on to the Almighty’s people. The problem is, God is surrounded by all sorts of hangers on. Cherubim, seraphim, archangels and the rest of ’em. Your words often end up as a kind of celestial political football, kicked in frustration from one department (or cloud) to another, and ends up bearing no relation to the heavenly piece of copy you first submitted.

Probably the most frustrating project I’ve ever had the pleasure of getting involved with was a brochure for a big firm of City lawyers. They wanted a brochure that would set them apart from their pin-striped rivals. “We’re younger, more dynamic, in touch with the real world,” they said. “We want you to really get creative and enjoy yourself,” they said. I took this with the necessary seasoning, but finally turned in something that I felt did them and myself justice, particularly given the scanty background material I had to work with.

Every few days, the project manager from the design company would be on the phone. “I’ve just got the amends from so-and-so,” she’d say. “So-and-so’s boss wanted to insert some more details in this paragraph“. “Can you just change this around, someone else’s boss’s boss has just read it.“ “The cleaner says it needs an injection of pace.” We got up to 12 or so drafts. “We’re so nearly there now,” said the hard-pressed but sympathetic project manager. “The chairman just wants to have a quick read through.”

Of course the chairman completely rewrote it. And when it was printed, apart from all the hellish typos and grammatical errors, they sounded just like any other big City law firm. They even insisted that the front cover was changed from a rather daring purple to a sober dark green. But that’s God’s prerogative.

The Holy Ghost was paid for his efforts but rued that his skills and his time had fallen on stony ground. We may be invisible, but we still have feelings.

This article originally appeared on www.thewriter.co.uk.