Fiona Thompson doesn’t have a yellow pencil, but she did win an International Naturist Federation press prize for an article on British nudist camps. She’s a board member of 26 and runs her own writing consultancy business www.wordspring.co.uk. Follow her @wordspring_uk

The word ‘Pimp’ gets my attention, next to a picture of a man with an impressive handle bar moustache. In his right hand, he’s holding an extendable dog lead attached to a Siamese cat. His heavily tattooed left fist hangs at his side, weighed down by a chunky metallic watch. Behind tinted glasses, his look is impassive. 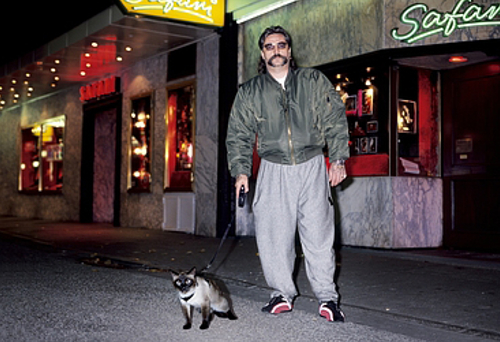 No one has ever told this man that you should always balance baggy clothing on one half with tighter clothing on the other, so he’s sporting a voluminous shiny grey blouson jacket over loose-fitting grey trackie bottoms.

It’s night time and he’s standing outside a club with the name ‘Safari’ picked out in neon. To be honest, he looks more like a bouncer than a pimp. He and the cat are both illuminated, as though caught in the headlights of a Renault Fuego. (I’m guessing this would be a red Fuego Turbo, with a gold gearstick in the shape of a knuckleduster.)

The man is not inclined to move. The cat is less certain. Its eyes are open wide and though the lead is not pulled taut, you get the feeling it would shoot off if it possibly could.

It’s all very intriguing. So far, I know that it’s an ad for something called Fressnapf made by DDB Germany, which won a D&AD Photography / Press Advertising award in 2006. But from the picture, it’s anyone’s guess what the ad is for. Hair gel? Steroids? Dog leads?

Google reveals the missing link. On the billboard poster, in the bottom right corner, there is a picture of a tin of cat food with the slogan ‘Makes cats strong’. I am disappointed. We’re supposed to believe that this cowering cat has been transformed into the equivalent of a Doberman Pinscher simply by eating Fressnapf?

To give it the benefit of the doubt, perhaps the Siamese has only just embarked on its new regime, and the full potency of the cat food has yet to kick in. Maybe after a couple of weeks, the cat will be turbo charged and straining at the leash, dragging steroids-man in its wake as it lunges at wannabe clubbers who are wearing the wrong trainers.

Or perhaps there’s been a mix-up. Blinded by hair gel, the bouncer has mistakenly been opening cans of Fressnapf instead of his usual all-day ‘Breakfast in a tin’.

But now I’ve taken it a step too far. I’ve over-Googled. Apparently Fressnapf’s new cat food flavours include ‘beef and poultry with figs and sunflower seeds’ and ‘duck and shrimps with seaweed and sesame’. That kind of food has no place in our bouncer’s kitchen. It could permanently reconfigure a man’s mullet. Should we send out a warning?