D&AD Archive Dive: I and J 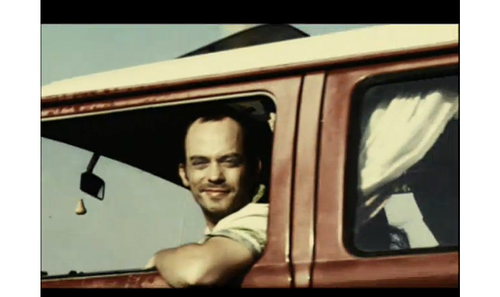 I is for I Love Music

David Manderson works at the University of the West of Scotland for four years, where he’s lead Modules in Creative Writing and Screenwriting and a Creative Practice degree. His novel Lost Bodies was published this year by Kennedy and Boyd. He lives in Glasgow with his family, plus cat.

I remember this smile. A travelling smile, a smile from the side of the road, heads turning, a smile that follows you, passing from one face to the other, the same moment, the same emotion.

Surely this how it was for me when I was younger. A moment of sunlight passing through me. Doing things because I wanted to, the thought and the feeling coming together in the moment, for no other reason. What better reason could there be? (Or maybe, to be truthful, that’s how I felt I’d been when I was a bit older, when I didn’t do it any longer).

And what a world where this smile goes! From the beaten-up van to the pavements and the gardens, from the suburbs to the city to the seaside towns, the bicycles and cars and overhead trams and back again. It’s a time-traveller’s smile. This is not now.

This is never-world, a place we think we remember, an older place of hedgerows and policemen in villages, when neighbours were neighbours and old ladies stood safely in gardens. Staring at the stranger, the traveller in the van, the one who isn’t one of them, the space-cadet who passes them and smiles at them, and passes the smile to them.

And it spins through time. Time is the journey, from thirties houses to modern beachfront, but going backwards, everyone getting younger, more free, more beautiful.

And somehow the music says all this too, a slow slide into delight, a lazy hazy hope, strange and beautiful, a smile-song as short and passing as the thing itself. A passing moment, a glimpse or a memory, a floating fleeting feeling. And looking out, looking up, you send out that beam to another, for nothing, for no reason. Just for the joy of it.

On the other hand, it’s just an advert. Staged and waged for our wallets, to make us think a thing will bring us a lifestyle, but done expertly. An air on a single string: the life of a moment, the same one again and again. Scripted and timed and acted and edited to wink like the sun from the screen.

And always the presence of the car, not in our faces, but there in the backdrop like corner shops and English pubs and old-fashioned coaches, nearly invisible but always seen. The hippy in his vanished world, today’s young people, and the updated car at the beach. But it’s still the same journey that started years ago, leaving home.

And the people go. And the mirrors go. And then there is just the sea and the lazy hazy blue. And the word ‘Beetle’. 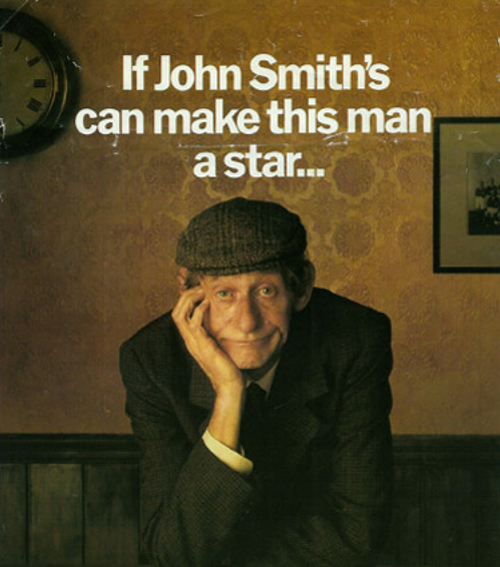 J is for John. And also for John.

Chris Miller. The copywriter with his own strapline.

J is for John. And also for John.

The John Smith’s Yorkshire Bitter campaign that ran in the south of England during the 1980s was the brainchild of John Webster, BMP’s creative director.

I was still at school when the campaign started, and was completely charmed by it. D&AD jurors were pretty smitten, too.

Curiously, the campaign didn’t run in the region where the ads were set and the beer is brewed. It was believed that the good people of t’north wouldn’t take kindly to the stereotyping.

Maybe they’d turn nasty, the way they did whenever the BBC screened The Last of The Summer Wine, and set their whippets and pigeons on the riot police?

So if you’re very young, or very northern, here are a few of the finer details.

Rubber-faced actor Gordon Rollings starred as Arkwright, the hero of the campaign. Rollings had trained as a clown in Paris, the city where – quelle coincidence! – Webster was born.

In the course of 32 photographs, our man changes from a happy-go-lucky factory worker into a spanner-wielding maniac. The facial gymnastics are a joy to behold.

And, of course, Webster (a “blithering genius” © Graham Rose – according to Dave Trott) created a pantheon of much-loved advertising characters far too numerous to list here.

Back to Arkwright. He had a wife, a dog and a mate (with whom he did a Laurel and Hardyesque song and dance routine in one ad). And, invariably, a pint. 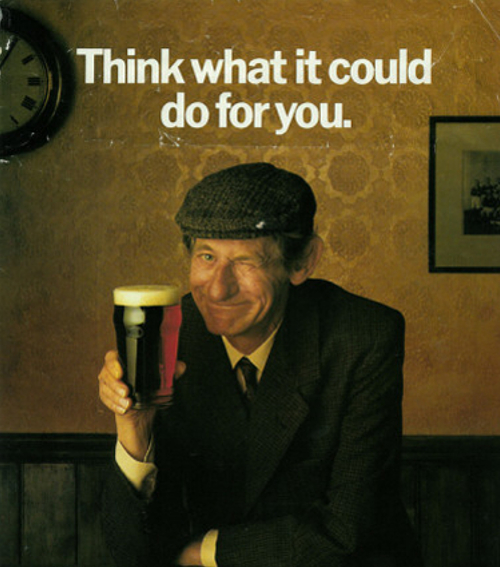 My favourite ad of the campaign:

A man knocks on the door of a terraced house. It’s answered by the robustly proportioned Mrs Arkwright.

Man: Is Arkwright in?

Man: D’you know where he is?

Mrs A: Just a minute. I’ll look at his caps.

She looks inside the doorway.

Cut to Arkwright, sipping a pint of John Smith’s at his local. He’s wearing a cap covered in fishing flies.

Marvellous. The brewer’s marketing department could easily have shrieked “No!” at this. The dialogue’s minimal, bordering on the terse. And there’s no conviviality: in the ad’s final shot, Arkwright’s on his own. Blissfully happy; but very much on his tod. And not looking representative of the target demographic AT ALL.

Unusually, there was no fixed strapline for the campaign. Each commercial effectively had its own individual sign-off. “Never judge a person by appearances”, in the case of the ad above.

The Jack Dee and Peter Kay campaigns that followed this one both took the theme “no-nonsense”. And they were terrific, too.

Ee, I did miss Arkwright, though.

See the Arkwright ads here, and the 2003 Nominated work below.