Dan Radley is Executive Creative Director at Start JG, the brand, environments and interaction agency. Best known as a writer, he’s also worked as a composer and film-maker. Twitter: @damnradical

Good things come to those who wait. Sadly, I’m still waiting for my call from Diageo to say, “Look Dan, we couldn’t get Juan Cabral, would you be up for doing the next Guinness commercial?”

For the record, “Yes!” But having explored the recent body of work, I detect a downside – the crushing weight of expectation that comes with every Guinness assignment. 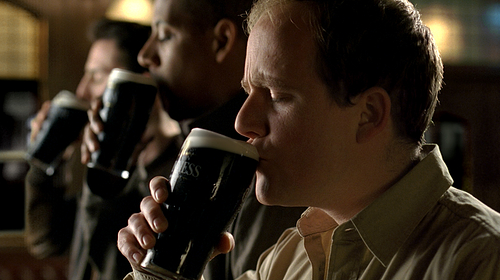 Described by Campaign in 1998 as the iconic brand of the century, Guinness ended the last millennium on a high with Jonathan Glazer’s sublime white horses.

The D&AD archive reveals another decade of impeccable craft. But at times the pressure to produce an epic film or social media phenomenon shows through in the work. I found it hard to connect with men playing God, artists lighting up a tower block or Argentinian mountain villagers toppling giant dominoes.

That’s why I love the 2006 ad which starts with three blokes at a bar, then rewinds evolution to the fateful moment when a proto-amphibian takes its first sip of the primordial slime. Four hundred million years in 50 seconds, backwards.

Our time-lapsed trio are reversed into the ice-age, glaciated, stripped down to their loin cloths and prosthetics, then sucked back through pre-history as a succession of furry, flying creatures. A meteorite heralds the return of the dinosaurs and before you can say “velociraptor” our heroes have morphed into mudskippers, rolling their eyes and gagging on swamp-water. Three pints of Guinness appear and we realise that natural selection has led inevitably to this thirst-quenching moment. The ascent of man is complete.

Despite all the visual effects, it’s the ad’s music that really puts a tingle in your feet. I reckon they’d probably had a few too many when they replaced the original Groove Armada soundtrack with Sammy Davis Jr., but it works – The Rhythm Of Life keeps things bouncing along at 170 bpm.

And the inspired decision to run the action backwards introduces an element of surprise that rewards repeat viewing. I urge everyone to watch the amazing flying fish sequence of transitions on pause and rewind, then check out the 2007 parody for Guinness Extra Cold.

My outpouring is nearly done but before I add the frothy finish, let’s pause over the tagline, which turns a potential product weakness into the brand’s defining strength: Good things come to those who wait.

Here’s to the lucky creative team who, even now, are agonising over the next Guinness masterpiece. Think irresponsibly.