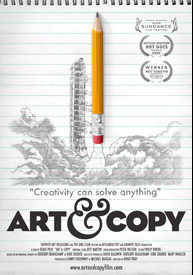 It excited me so much I marched along Tottenham Court Road breathing deeper than usual. The man with the Apple bag didn’t know why. Neither did the girl in the Hilfiger boots. I had to get to the station. To sit, to recount, to write it all down. To put copy to the art in my head.

At the station, two girls chatted. “It must’ve been a bad film: I can’t remember anything about it.” It sounded like Hollywood hadn’t matched what I’d just seen. I sat in the station. My train approached. It stopped. Faces fell out. It pulled away.

Instead of telling me to board the train, my mind repeated the words of George, Lee, Hal, Phyllis, Mary. And I wrote.

On Friday, I attended the UK premiere of Art & Copy (a film by Doug Pray) with Dan, the owner of branding and advertising agency Dmastermind. After a brief introduction from The One Club (“to support the next generation of advertising professionals”), we reclined in the luxury seats of the Charlotte Street Hotel cinema, flipped out the in-built tables, and waited for the treats to begin.

Chad hit our screens. A poster boy. Sort of. Not the start we expected.

People like Chad are the final link in the advertising chain, before consumers judge the power of advertisers’ creativity with their habits, their voices, their movements and most importantly – to businesses at least – their money. Chad is one of many whose job it is to paste adverts to billboards. And with billboard rotation employing three generations of Chads, the man pastes with care. But Chad is just one small part of a process that begins years before.

Art & Copy is a collation of wise words from advertising greats of the last 50 years. The first man to strike us is George Lois. Here’s a man, a self-proclaimed Greek streetfighter, who grew up in the Bronx in New York. George brought the world “I want my MTV” and put Tommy Hilfiger on the same page as Ralph Lauren and Calvin Klein. “That ad turbo-charged my success,” says Hilfiger, years later, now recovered from the embarrassment of appearing on the same bill as his idols.

The ad is simple. It’s art and copy. It’s “Hangman” with the Tommy Hilfiger logo as the only clue. “It’s seemingly outrageous,” explains Lois. It’s not actually outrageous, once you’ve looked at it for a few seconds. “It’s on the nose.”

Lee Clow (TBWAChiatDay), the man behind Apple’s biggest ads, is a surfer, family man, ideas man. Clow painted a ship as a child. The smoke floated in the right direction. From then, he knew he wanted to be an artist. “My art was going to be my way of making a living.” Clow developed into one of the most powerful advertisers (“media artists”) in the world. But that doesn’t mean he always gets his own way. “We can’t allow clients to dictate mediocre work.” Bad advertising – thoughtless, artless, benign – is, to Clow, “an insidious cancer”.

“They can’t do shit if we don’t do ads for them. We should be in charge.”

Hal Riney, a man who brought heart into advertising, explains how creativity in business has transformed since the 1960s. “Creativity wasn’t really anything. Creatives were just flunkies in the agencies. I wanted to be an account guy in a suit.” So he became one. And hated it. Soon a spark turned him into a leading creative thinker for brands like Perrier. Riney was the man who asked Paul Williams from The Carpenters to write a song for Crocker Bank, to bring some young blood to the brand. “We’ve Only Just Begun” was born. And lives on.

An hour and a half of Art & Copy passed in a blink. The cast of artists, writers, thinkers and doers entertained throughout. And, of course, the film is expertly and beautifully edited together.

The film leaves the viewer with a clear message, which is reiterated by George, Lee, Hal, Phyllis, Mary and more. It’s the message that crosses the floors of Wieden+Kennedy, TBWAChiatDay, DDB, Goodby, Silverstein and Partners. The message that should be driven deep into businesses and agencies that consider “How big do you want the logo?” a creative question.

And it’s this. Storytelling and artistry should be at the heart of branding – they raise consumer expectation, which raises standards. Which can only be a good thing. “If the product’s no good and I’ve said it is, then I’m out of a job,” explains Lois.

Take risks. Do what people don’t expect. Push boundaries.
In the words of the Bronx streetfighter who turned MTV and Tommy Hilfiger into overnight successes: “Everything should be so ambitious.”

If you like art and copy, see this film.