Nick Asbury is a freelance writer and one half of creative partnership Asbury & Asbury. His work has won two yellow pencils in Writing for Design and appeared In Book several times. You can follow him @asburyandasbury.

The brief: design a press ad for the last ever episode of ‘Friends’, airing on Friday. 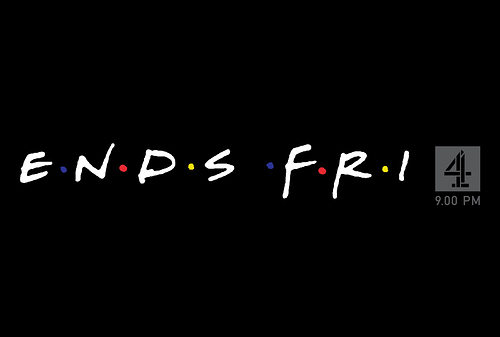 I think beautiful is the word. There’s something about ideas like this that goes beyond being clever or funny or witty. Yes, we admire the cleverness of the creatives for spotting the opportunity. But more than that, we admire the sheer serendipity of it all. It’s beautiful that the universe can occasionally align itself in such a way as to produce ideas like this. What if ‘Friends’ had aired on a Thursday? What if it had been called ‘Flatmates’?

It reminds me of an interview with Shane MacGowan, where he said he doesn’t so much write songs as discover them. They’re already floating around out there and he just reaches up and grabs one. Some ideas are like that.

And what makes it more satisfying is that it’s a real idea. Channel 4 needed to promote this. It had to be something instant and informative for people flicking through their newspapers and glancing at the listings. The answer is simultaneously as pragmatic and on-brief as it’s possible to be, while also being as clever and lateral as you can get.

For me, it’s ads like this that make the D&AD archive a thing of great value. If you want to persuade the public of the value of advertising and design, almost as a kind of commercial art form, then it’s work like this that does it. It’s a little, sparkling fragment of cultural history, instantly evocative of a certain time and place. It almost reads like a short poem, artfully summing up an entire decade in two words.

And it only got in-book.