Archive Dive: D is for Decode

Peter Blackman has won a Newspaper Society award, has contributed pieces of journalism, and book reviews for magazines, local and national newspapers. He is now a Director at Double Art. You can follow him @freethinkeruk. 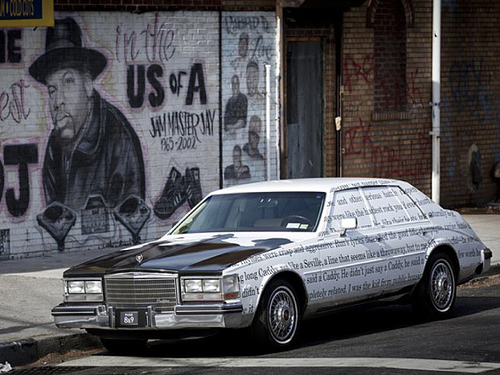 No not New York. But Newport. Flavor Flav of Public Enemy bounds on stage, clock bouncing from the chain around his neck. Flavor knows what time it is. Security of the First World are on stage, trooping their colour. Terminator X is behind the decks. But it’s Flavor and Chuck D that we’ve come to see.

The booing begins. An S1W misses a step. Flavor drops the mic from his mouth. Chuck D folds his arms. Empty beats continue to snap, but there’s no rap until word arrives.

Cheers. Whistles. ‘Fight the Power’ booms out across the venue. But up in the balcony, I’m fighting a growing sense of unease. Rakim has reassured me in the past that ‘it ain’t where you’re from, it’s where you’re at’, but somehow Flavor’s not knowing where he was ‘at’, the booing, and Chuck D’s amused contempt at the reaction has made me feel acutely absurd.

‘Elvis was a hero to most

But he never meant shit to me

Straight up rascist that sucker was

Motherfuck him and John Wayne”

As my friends are singing, I’m cringing. It’s 1989, and I’m 18. Privately educated. White. Middle class. Even my name is an embarassment in this situation. I’m a Blackman in name only. Yet I’ve come to see a highly politicised rap group tell me how the world needs to change. I love rap, but tonight I feel a long way from home.

Twenty years later, and in Decoded, Jay Z explains what was going on.

He’s right, and in 1989 it was a speech that rightly made me feel uneasy and uncomfortable because it laid bare the absurdity of my white b boy posturing.

“I don’t think any listeners think I’m threatening them…I think they’re singing along with me, threatening someone else. They’re thinking, Yeah, I’m coming for you.”

He’s right again. For when you’re an insecure and angry young man, you want to threaten someone else – not be threatened yourself. The launch campaign for Bing featuring Jay Z and Decoded reconnects me to the teenager within. To the inescapable cool of New York City, the hardwired desire for luxury hardware and lifestyle, the thought that with my very presence, in the glower of my threat – ‘I’m coming for you’. It’s why it worked so well. It captured the power and glory of Jay Z’s rise and allowed people to see it, feel it, become part of it.

For an adolescent moment I’m part of it too. But my reality is that I’m older. A little wiser. And my favourite Jay Z song? Well, it’s the parody of New York State of Mind. Set where? Where else? Newport.