Aleph – the letter with no sound 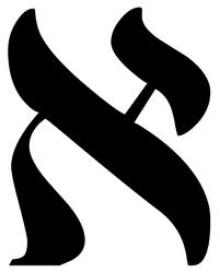 David Bodanis, author of ‘E=mc2’ and ‘Passionate Minds’, and speaker at Wordstock, reveals an extract from his new book, ‘The Ten Commandments’

The Hebrew alphabet is one of the oldest in the world, and its very first letter, the ‘aleph’, has no sound. To use it you have to go beyond what you see. That’s a powerful concept, and something of it is at the heart of the Ten Commandments. Those commandments are like a powerful ‘justice’ machine. Switch them on, and any society they whir away in will run in a fairer way.

But how to get them started? The second of the commandments, the one about no false idols, is central here – and very much like the quiet aleph. Focus on an idol, and you have responsibilities to it. It keeps you worshipping money, or a nation, or your career. But in all the years you spend tending to your idols and nourishing them, you have very little left over for anything else.

The aleph is different, just as is the second commandment. The letter aleph can’t be worshipped, for it’s not really there. It’s just a sign of something else. When idols are treated like that, it’s impossible to waste time on them. They can guide you, but aren’t going to take over. Instead, there’s no alternative but to turn to the real world around you. That’s the ultimate equation for life. For then, unburdened, you can enter what’s waiting there.