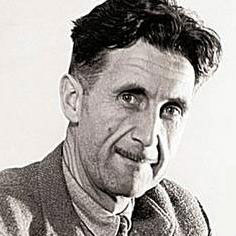 This month, John Simmons reports on the Designer Breakfast with Nick Eagleton, creative director of The Partners, prompting thoughts about success and failure, with George Orwell looking on…

Nick Eagleton called his talk “There’s no success like failure”, which is a line from a Bob Dylan song. This immediately sent me back to my student days when one of my aims was to work a quotation from Dylan into every essay I wrote. Seeing the title also meant that the next line from the song formed instantly in my head, “…and failure is no success at all”.

Nick Eagleton was brave to acknowledge failure in his talk. There was mention oxymorons – “successful designer celebrates failure”. What perhaps wasn’t said was that there is a fine line to tread. It’s easy to tip over the line into the possible arrogance of owning up to small failures to draw attention to big successes.

Anyway, that danger was averted. Personality helps. Nick came across as someone to share a self-deprecating joke with. After all, as he said, “No one died”.

But if no one died, it means the failure didn’t matter. You can shrug and move on. So we do. So he did. But then he paused to think about it.

At this point let me bring in George Orwell for a word or two. George is always worth listening to: “In a time of universal deceit, telling the truth is a revolutionary act.”

Nick thought about his heart-surgeon father-in-law. This heart surgeon could not shrug off failure. The story went that this was a man so committed to excellence that he retrained with the world’s best heart surgeon. He was determined that fewer babies would die as a result of his operations. Here was a man operating to the finest margins, whereas you and I…

George Orwell looks at us severely from the corner of the room, perhaps a little disappointed. We ought to try harder.

Perhaps, in a way, someone dies

“Failure is not an option,” said Gene Krantz about the Apollo 13 mission. But, let’s face it, it’s an option for us.

Nick’s point is that we all fail. But we all need to think about our failures, learn from them, decide to do something about them. What we need to do is not laugh them off as unimportant. Perhaps, in a way, someone dies. Murdered by a misconceived idea. Assassinated by a lack of thought. Killed by an incorrect comma,

So how do we go wrong? There are three kinds of error. Skill-based (but our business is not that based on skills). Rule-based (but we have an innate resistance to rules and wish to break them, no matter what the guidelines might say). And knowledge-based. This is where we should focus because, in our work, we deal in judgement and errors of judgement.

The result is described as ballistic behaviour. We shoot, we miss. Next time we shoot again, we miss again. This sounds like a failed revolution.

There’s only one cure. Think about your thinking.

Icarus lives inside us

I agree with Nick. It’s good to think about your thinking and we don’t do enough of it. But, as the theme is “telling the truth”, I must be honest and say, thinking about it, you let yourself off lightly, Nick. Here’s what you said were your failures, from the examples you used. The good thing was that we could all think of similar examples from our own experience:

Well, fair enough. Except that these are all failures that show you in a good and clever light. The real bravery is in admitting something different. Perhaps ‘I wasn’t up to this’. But that’s a much harder thing to do – and, to tell the truth, I’m not sure that I could admit to failure in that way. What’s more, I’m not sure that we should because it’s a self-destructive admission. We’re human beings, we’re programmed to strive, to achieve, to win. Icarus lives inside us. Inevitably, sometimes we fail. If we took every failure to heart, we might not try again.

So we have to think about our thinking. Where was our thinking wrong? Where was it right? I guess this is one of the reasons why I’ve written books about writing: I’m trying to discover what works and what doesn’t. That’s a worthy goal. But let’s not take it too far and encourage others to kick us when we’re down.

Because, as Nick made me realise in the end, thinking about thinking, Dylan was wrong in singing “failure is no success at all”. Inside every failure there is something that succeeded. We just have to find it, and that takes some thinking about.

Which leaves George Orwell still sitting in the corner. He’s looking at me with unblinking eyes. I can’t avoid asking him, as one writer to another, if he has any advice for me – or indeed for the designers who’d come here for breakfast and inspiration.

He was deep in his own thoughts. Was that it? Did the road to Wigan Pier just lead to silence? But no, he spoke.

“My first rule for writers is: Never use a metaphor, simile or other figure of speech which you are used to seeing in print.”

“That’s good,” I said. “Designers write and they can adopt that. But would you say to them: Never use an image which you’ve knowingly ripped off from someone else?”

George smiled enigmatically. “My second rule is: Never use a long word where a short one will do.”

“Perhaps, for designers, go for simplicity of imagery, not layer upon layer of complexity?”

“I think so,” said George. “My third rule is: If it is possible to cut a word out, always cut it out.”

“Exactly. And rule number four: Never use the passive where you can use the active.”

That’s trickier, I thought, as it’s about grammar. But then I thought this might be the equivalent: Let white space do its work, don’t feel you need to fill all the spaces.

“So,” said George, “just one left, my fifth rule of writing: Never use a foreign phrase, a scientific word, or a jargon word if you can think of an English alternative.”

“OK, how about this? Find an idea that’s right. Stick to it. Don’t deviate from that idea with any design frippery. Is that true, George?”

Of course, he didn’t answer. He had the most disconcerting stare, as if he was weighing you, finding you perhaps too heavy, perhaps too light.

“We all have to find our own truth.”

We can but try. And if we fail, we can but learn.

George Orwell: John’s nomination for the patron saint of 26. Who would you nominate? Email your nominations to Elen.