On the 26th of August, 26er and Dark Angels partner Neil Baker will be leading an experimental wander through the streets of London. The plan is to experiment with the idea of taking ‘photos’ with words, rather than a camera. This is a brilliant opportunity to learn new skills, and by the end of your travels you’ll have made your very own portfolio of ‘Wordographs’.

You can book your place today. 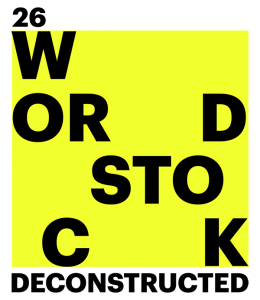 On the 21st September, John Simmons will be hosting a Q&A with screenwriter Rob Williams. Rob learnt his craft at the BBC’s scriptwriting academy and worked on EastEnders, Doctors and Casualty before getting his own original drama show, ‘Chasing Shadows’, on ITV. Recently, he was lead writer/consulting producer on the hit Amazon drama ‘The Man in the High Castle’.

We’ll also be announcing the winners of the Emerging Writer award at the event.

Get your tickets quick 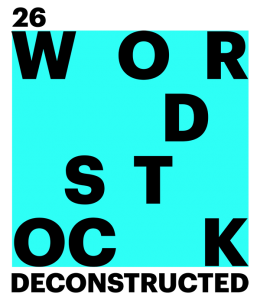 Wordstock is heading to Bloomsbury Festival. Our event will be hosted by Radio 4’s Alan Dein (speaker on oral histories at Wordstock 2016) and will feature the results of a soon-to-be announced project called 26 Memory Maps.

The event will be on Wednesday 18th October, 7-8.30pm at Goodenough College Common Room (one of Bloomsbury’s hidden treasures).

We’ll have plenty more Wordstock Deconstructed events happening for the rest of the year. We’re keen to encourage more events at the initiative of individual members – particularly in other parts of the country. If you’ve got an idea, please contact Andy Hayes andysillybignumber@gmail.com