This is the place where you find news and events around all things 26, from July’s Pecha Kucha, to Wordstock on film to a new project called 26 Letters and the ripple effect of 26 Treasures of Childhood. 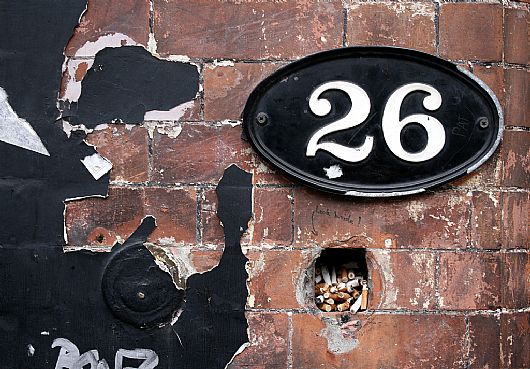 It’s 26… it’s the Betsey Trotwood… it can only mean more of that pecha wotsit thingy. Be sure to mark your diaries for the evening of Tuesday July 2nd for more high-energy slideware and scintillating stories.

Come along and hear another eclectic mix of hot topics and cool yarns, wordy challenges and undoubted charm from a bunch of writers including Roger Horberry (author of Brilliant Copywriting and 100 Lessons on the Meaning of Life in 100 Words or Less), Susan Greenberg (senior lecturer in creative writing, Roehampton University) and Martin Lee (co-founder of Acacia Avenue and 26 director) and more who will soon be revealed. Ezri Carlebach

From Acidulate to Zaffre, 26ers teamed up with members of the Letter Exchange over a drink and a dictionary to meet, select and get creative. From the slightly acidic Acidulate to the blue pigment of Zaffre, every letter of the alphabet will get a chance to shine.

So we gathered in the Betsey Trotwood downstairs room, a place that seems to have some historic atmosphere that you can’t quite identify. And we randomly chose words that in some cases we couldn’t quite identify either.

‘We’ were writers from 26 plus lettering artists from Letter Exchange. We’d all been paired in advance and many writers had peeked at inspiring, beautiful websites featuring the work of their new visual partner. All that remained to do, over a welcoming drink, was to choose 26 words to represent each letter of the alphabet. A representative of each pair stepped forward to insert our ceremonial knife into the appropriate section of the Oxford English Dictionary and let the tip decide the chosen word.

Will Awdry got ‘Acidulate’ that will send him scurrying back to the dictionary. Then off we went pair by pair – Bettement, Connected, Dig right through to the exotic end-letters with Xenium, Yankton and Zaffre. If you don’t know what they mean, you know where to look.

So the pairs are formed and they each have a word. Much collaboration will now take place and the results will be shown at an exhibition space (or two, or three) later in the year. So watch this space…. John Simmons 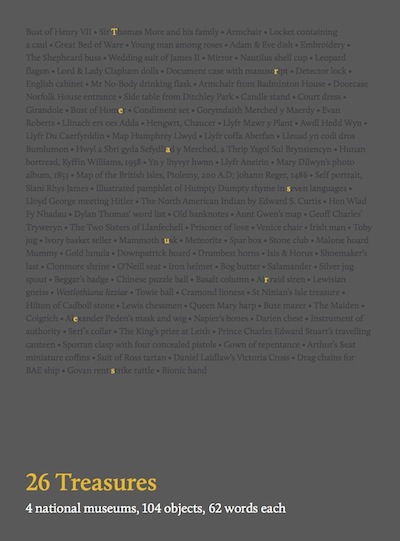 John Simmons reflects on the success of the 26 Treasures project with help from both Rhian Harris, director of the V&A Museum of Childhood and curator of ‘Modern British Childhood’ (1948-2012), and school teacher Talia Foster who was floored by the impact 26 Treasures had on her students.

First some words from the V&A’s Rhian Harris, ‘Modern British Childhood has been great – we’ve 192,000 visitors at the beginning of March! Lots of interesting and positive feedback.

Thanks again so very much for the wonderful contribution that 26 (and Ministry of Stories) made to the exhibition – it added another such interesting level of interpretation as well as beginning great work in their own right. It was a real pleasure to work with you.’

26 also had the following letter from a secondary school teacher (Mrs Talia Foster) who visited the exhibition with her class. She wrote….

“On a recent visit to the Museum of Childhood I picked up a copy of ’26 Treasures of Childhood’, which I thoroughly enjoyed. As a secondary school English teacher I was intrigued and excited about the idea of a whole new writing form and, after doing a little research about your writing group, I vowed to encourage my students to experiment with it.

Following the study of Othello and three of Browning’s poems (for which they will soon have to write a Controlled Assessment on the presentation of disturbed characters), I challenged them to write a sestude inspired by any, or all, of the texts they have studied. I remember reading in one of the articles about the ‘invention’ of the sestude that you wondered if one day a teacher may stand discussing them in the same way we consider sonnets. Well, I did.

I was overwhelmed with the quality and imagination of the work produced by these Year 10 students (aged 14/15) and thought to share them with you.’

The sestudes written by the children were indeed stunning. Everyone involved in ’26 Treasures of Childhood’ should feel very proud. The exhibition has now finished but its legacy continues.

Elise Valmorbida, co-organiser of Wordstock 2012, launches THE film, ponders the plural of pecha kucha and dares Wordstock 2012 attendees to see if they’re on camera.

We trailed it in January, and now we can safely say it’s here for all to see: the video version of Wordstock 2012, when 26ers and soon-to-be-26ers gathered to learn and share and generally get verbal for a day.

One man with a camera (Kieran Conlon) and two Wordstockers roved the Free Word Centre, dropped into seminars and speeches, witnessed poem readings and pecha kuchas. (What is the plural of pecha kucha?)

See if you’re in the short film – our document of the day. See if you’re in the really short film, our trailer to show future partners who might help out with funding, gadgets or bunting. There’s only so much a collective can do with tuppence ha’penny. And gosh, this is our 10th birthday year.

Once you’ve viewed a vid or two, feel free to share with anyone you think might be interested. Get facebooking or tweeting. LIKE. And make a date in your diary for this year’s Wordstock: Saturday, 9th November.

Here are the links on our very own 26writers youtube channel: