Paul Murphy is currently tracing the footsteps of Laurie Lee through Spain but he’ll return to appear at the Penzance Literary Festival from July 25 – 29 where the theme this year is ‘Journeys’. Fellow 26 member Suzie Cunliffe will also take part in a discussion on how to avoid Writer’s Block.

Before Festival madness hits Edinburgh, let’s have a 26 get-together on 26 July! Central venue chosen in the hope of enticing other members from further afield…

Where? Spoon, Nicholson Street, Edinburgh (opposite the Festival Theatre)

Who to contact? Cat Dean (cat@catdean.com / @cat_dean). If you’re planning coming, please drop me a line so I have any idea of numbers – thanks! Cat Dean 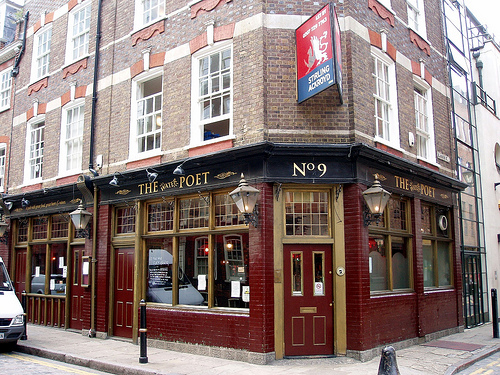 The Water Poet
Some of my favourite writers were drunks. Most of them are dead now. And three or four pints is my limit these days as I slide into middle-aged mediocrity. There’s no place for sick on your slippers.

I digress. In late May, Fiona Thompson organised a drink-up at The Betsey Trotwood on the Clerkenwell Road in London. The idea was to meet with other 26 members in a literary themed pub. It was fun. More people turned up than we expected. So we decided to organise a regular ‘session’ once every few months.

Next up is a real find courtesy of 26er, Lynda Relph-Knight, the eminent design columnist and commentator. It’s The Water Poet, hidden in a dinky backstreet near Spitalfields Market, not so far from Brick Lane. We’re going to wait until the Olympics is done & dusted and everyone is back from their summer holidays. It’ll start from 6.30pm on Thursday 6th September, five weeks before Wordstock. We look forward to seeing you there. And we hope that other 26 cities, towns and villages will be able to sort something too.

Good cheer to all! Andy Hayes