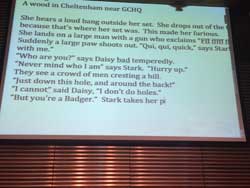 From an angry badger and a chicken called Janet, to the story of a lost song and life on Mars in the Utah desert… here are 26 things we learned at Wordstock last Saturday. To those of you who were there too, enjoy; for those of you who weren’t, this is what you missed. See you next year.