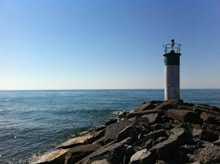 The first piece of news is that our collaborative project, between 26 visual artists from Prince Edward County in Ontario, Canada, and 26 writers from across the British Isles who will ‘give voice’ to a piece of their artwork, has a name – 26 Atlantic Crossings.

We brainstormed boundaries, borders, frontiers, freedoms, crossings and crossings out. We asked ourselves, ‘What is between us that unites us?’ We hummed and hawed. Then we asked, ‘What is between us that separates us?’ The answer came immediately: the Atlantic, an ocean across which generations of people have searched, back and forth, for inspiration and opportunity.

So far the random pairings of artists and writers have been made. The Canadians have produced their work and within the next few days the images will arrive in the writers’ inbox. And the reflecting and responding in 62 words will begin.

In Canada, 26 Atlantic Crossings will have a three-day exhibition of the original artwork and their sestudes from 22-24 August at Books & Co in Picton. Then they will be returned to their studios of origin for the PEC Studio Tour, which runs from 19-21September. We will have a webpage on the PEC Studio Tour’s website and lots of press coverage is being planned for Toronto, Ottawa and Montreal, as well as local coverage. There’ll be umpteen uses of social media. And, of course, there’ll be a launch party, with drinks provided by local wineries.

And what about this side of the Atlantic? Hopes, ideas, dreams. Big ones! There are so many stories we want to tell.

An exhibition – five actually, one each for England, Wales, Scotland, Northern Ireland and Eire where art lovers, readers and students of both can see how trans-Atlantic cultural connections and creative collaborations produce fascinating things. We reckon, however, that it’ll have to be a digital exhibition.

A lasting memory – something to sell, something to give, a small but beautifully formed book with images of the artworks and their sestudes. Other 26 projects have set the precedent and standards are very high!

A chance to meet each other – Canadian artists and UK writers saying ‘hello’ and ‘well done!’ It would be lovely, wouldn’t it, if we could do this face-to-face?

But all of this takes time, talent and treasure. We would need:

Dreams. I did say so. But, we’ve put together a pitch. Here it is. If you know of anybody, individual or collective, who would love to join in the fun, make our dreams (even the ones we haven’t dreamt yet) come true, with whatever they can, that would be wonderful.

Meanwhile, if all else fails, I’m sure we’ll be able to buy each other a round at an imaginary pub in the middle the Atlantic. Cheers!

We had a good, boozy get-together last month at Betsey’s. I was interested in finding out what other members wanted to do event-wise. Lin Sagovsky came up with the great idea of combining drinks with a cultural focal point. I’d be happy to organise tickets to Shakespeare’s Globe, if enough of you are interested. Just let me know and I’ll look into it.

If you’re not based in or around London, why not organise something in your own area? You can either submit something to Elen to be included in this newsletter, or post your thoughts up on our message board.