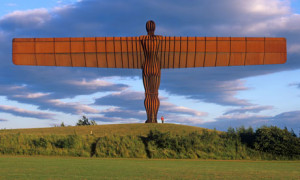 Sandy and Michelle aka @lizardvanilla and @ScribblerNE are both members of 26 who made a serendipitous connection via twitter after last month’s Wordstock. Travelling home on the train, Michelle was inspired by Michael Burdett’s presentation to listen to Nick Drake for the first time and tweeted:

“Heading north in the dark and falling in love with Nick Drake. Thanks for giving me 100 reasons to listen”

“He has an incredible voice”

And the conversation continued… as they explain below…

It turns out there’s more than just the music of Nick Drake to connect us. Michelle’s based in Newcastle, Sandy’s in Glasgow and later that night he emailed this idea:

“We pick a rail route from Newcastle to Glasgow that involves stopping at 26 stations. This route via Dumfries matches the spec if we make Newcastle a prelude or Glasgow a postscript, as it’s 27 !

We use the name of each station as the setting for a story, then invite 26ers to create a virtual rail journey. You do Newcastle, I do Glasgow Central. We just need 25 others.

Even more exciting, we get 27 of us to meet in Newcastle station one Sat morning and we challenge them all to write live as we share the actual route!”

What Sandy didn’t know until later was that Michelle had already added ‘26 journeys’ to the ideas board at Woodstock.

With so many connections, from writing to travelling, through to places in the north – it took John Simmons to suggest a name for the project which brought bring us back full circle. And so was born the idea of 26 under a Northern Sky.

Sandy and Michelle will write more in next month’s newsletter.