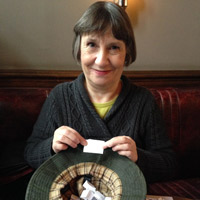 What you need is a reliable method, one that will maximise the serendipity 26 is famous for. And, because we like it that way, a traditional one too. The solution is: Names Out Of A Hat!

John Simmons, Neil Baker, Laura Hunter, Philippa Cowley-Thwaites and I are the editorial team for a project full of wonder, in liaison with The Story Museum. It’s called 26 Characters and will feature an exhibition of portraits by Cambridge Jones at The Story Museum in Oxford.

As for all 26 projects, it is our job to decide the pairings and then to shepherd allocated writers to their deadlines, encouraging their creativity and confidence along the way. But a spectacular storm and full diaries thwarted and conspired against us all getting together. So the duty fell to the survivors, John and Faye, to perform the sorting hat ritual. We did it to the best of our ability.

The challenge was doubled. Allocate letters. Allocate writers/characters. So, two sheets of paper were torn up into 52 pieces. Then we proceeded to do a ‘double-dip’ which felt very much like performing the World Cup draw that was going on that very moment in Brazil. (John had to tell me that.) I pulled out the letters and John wrote them down next to the names. We oo’d and aah’d at the matches.

Finally, the allocation of editors. Such a grand name for people who ensure the 62 word count and that deadlines are met and that queries are shared and messages received and understood.