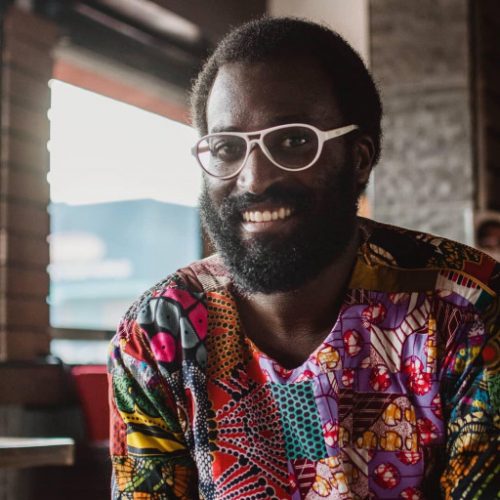 Mugabi Byenkya is an award-winning writer, poet and occasional rapper. He was born in Nigeria, to Ugandan parents and is currently based in Kampala.

Mugabi was longlisted for the Babishai Niwe Poetry Award in 2015. His essays, poetry and comics have been published in Carte Blanche, Best Canadian Poetry, and Skin Deep, along over 35 other publications. He has been interviewed on Voice of America, NTV Uganda, and Brittle Paper, along over 65 other media outlets.

Mugabi’s writing is used to teach High School English in Kampala and GTA schools. He won the Discovering Diversity Poetry Contest in 2017. In the same year, his award-nominated debut, ‘Dear Philomena,’ was published and he went on a 43 city, 5 country North America/East Africa tour in support of this.

In 2018, Mugabi was named one of 56 writers who has contributed to his native Uganda’s literary heritage in the 56 years since independence by Writivism (East Africa’s largest literary festival). Dear Philomena, was named a Ugandan bestseller in the same year.

In 2019, Mugabi was selected as one of ten emerging theater artists in bcHUB’s Emerging Artists Ensemble 2019/2020. In the same year, he was named a finalist for Realwheels Playwright-In-Residence and the recipient of an inagaural Realwheels Encouragement Award.

In 2020, Mugabi’s poem “If I Die Bury Me Next To My Father” was selected by Marilyn Dumont to be anthologized in “Best Canadian Poetry 2020” published by Biblioasis. In the same year, his debut ‘Dear Philomena,’ was nominated for the 2020 Nommo Awards For Speculative Fiction By Africans.

In 2022, Mugabi was one of three shortlisted finalists for the 26 Emerging Writers Award and received a high commendation.

Mugabi wants to be Jaden Smith when he grows up.