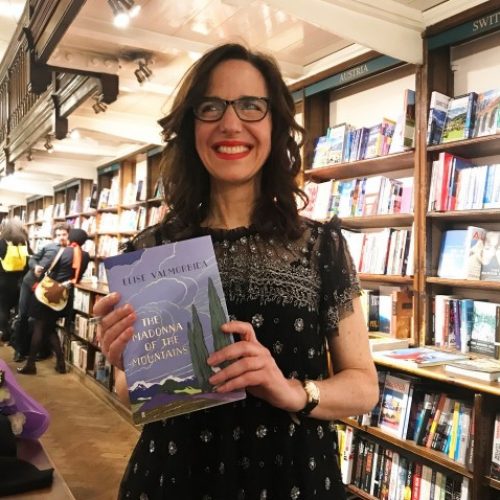 Elise grew up Italian in Australia. Then she fell in love with London. The romance continues.

BOOKS
Elise’s latest novel The Madonna of the Mountains was published in 2018 and 2019 by Faber & Faber (UK), and several international editions. Winner of the Victorian Premier’s Literary Award for Fiction, it is an Edward Stanford Award shortlister, Walter Scott Academy ‘Recommended’, The Times ‘Book of the Month’ and New York Post ‘must-read’. Other published works include fiction – Matilde Waltzing, The TV President and The Winding Stick – and non-fiction such as The Book of Happy Endings. See www.elisevalmorbida.com

BRANDS
An honours graduate in Graphic Design (Central Saint Martins) and former Creative Director at The Body Shop and Fitch, Elise runs communications agency word-design, offering clients a rare mix of strategy, design and writing services, with specialist expertise in brand voice and identity. Some of her favourite clients: Dishoom, Arvon, giant, Gorgeous Group and shift.ms. Elise has served on three D&AD juries, and was President of the D&AD Writing for Design jury (2017). See www.word-design.co.uk.

FILM
Honoured by the Edinburgh International Film Festival as a Trailblazer, Elise is the script consultant and producer of award-winning indie Britfilm SAXON, released to critical acclaim in 2009. Her story ‘The making of a guerrilla film’ was published with SAXON The Screenplay by CB Editions in 2008. See www.saxonthefilm.co.uk

TEACHING
Elise has been teaching Creative Writing at Central Saint Martins since 1998. At Arvon, she has taught ‘Suitcase Stories’ (Life Writing inspired by migration), Popular Non-Fiction, and Creative Writing & Wellbeing. She also leads creative writing workshops with literary festivals and community-building organisations. Elise is former External Examiner for the MA in Professional Writing at Falmouth University.

AND…
Elise is a member of The Society of Authors and English PEN. For 26, she has been most active with 26 Awards, Wordstock, 26 For Norwich, Throwaway Lines, International PEN and 26:50, a campaign marking 50 years of the Writers in Prison Committee. More recently, she set up 26 Training. In 2019, she’s co-leading a wonderful new writing project with the charity Fine Cell Work.


Active 2 years, 4 months ago
← Back to 26 members directory